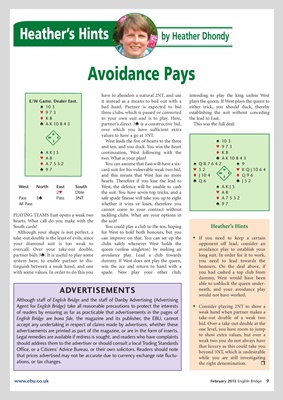 have to abandon a natural 2NT, and use intending to play the king unless West

´ 10 3 bad hand. Partner is expected to bid either trick, you should duck, thereby

™ 973 three clubs, which is passed or converted establishing the suit without conceding

t K8 to your own suit and is to play. Here, the lead to East.

over which you have sufficient extra

values to have a go at 3NT.

West North East South West, the defence will be unable to cash ´ AKJ5

All Pass whether it wins or loses, therefore you ® 97

cannot come to your contract without

PLAYING TEAMS East opens a weak two tackling clubs. What are your options in

hearts. What call do you make with the the suit?

South cards? You could play a club to the ten, hoping Heather’s Hints

Although your shape is not perfect, a for West to hold both honours, but you

take-out double is the least of evils, since can improve on that. You can set up the • If you need to keep a certain

your diamond suit is too weak to clubs safely whenever West holds the opponent off lead, consider an

overcall. Over your take-out double, queen (unless singleton) by making an avoidance play to establish your

partner bids 3®. It is useful to play some avoidance play. Lead a club towards long suit. In order for it to work,

system here, to enable partner to dis- dummy. If West does not play the queen, you need to lead towards the

tinguish between a weak hand, and one win the ace and return to hand with a honours. On the deal above, if

with some values. In order to do this you spade. Now play your other club, you had cashed a top club from

dummy, West would have been

able to unblock the queen under-

ADVERTISEMENTS neath, and your avoidance play

would not have worked.

English Bridge are bona fide, the magazine and its publisher, the EBU, cannot take-out double of a weak two

accept any undertaking in respect of claims made by advertisers, whether these bid. Over a take-out double at the

advertisements are printed as part of the magazine, or are in the form of inserts. one level, you have room to jump

Legal remedies are available if redress is sought, and readers who have complaints to show extra values, but over a

weak two you do not always have

that luxury as this could take you

Office, or a Citizens’ Advice Bureau, or their own solicitors. Readers should note beyond 3NT, which is undesirable