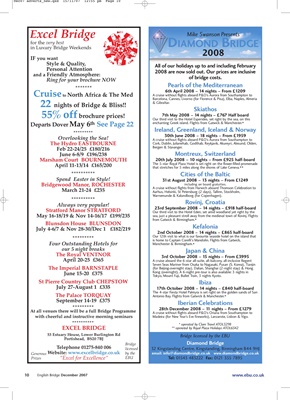 Style & Quality, All of our holidays up to and including February

Personal Attention 2008 are now sold out. Our prices are inclusive

Ring for your brochure NOW of bridge costs.

Our third visit to the Hotel Esperides, set right by the sea, on this

Overlooking the Sea! A cruise without flights aboard P&O’s Aurora from Southampton to

Bridgewood Manor, ROCHESTER including on board gratuities.

Stratford Manor STRATFORD Our third visit to the Hotel Eden, set amid woodland yet right by the

********* is home to Captain Corelli's Mandolin. Flights from Gatwick,

Kong (overnight). A 6-night pre-tour is also available: 3 nights in