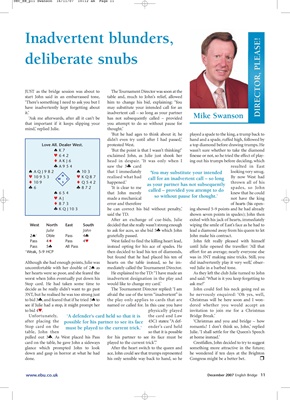 start John said in an embarrassed tone, table and, much to John’s relief, allowed

‘There’s something I need to ask you but I him to change his bid, explaining: ‘You

it.’ inadvertent call – so long as your partner

‘Ask me afterwards, after all it can’t be has not subsequently called – provided Mike Swanson

‘But he had ages to think about it; he played a spade to the king, a trump back to

didn’t even try until after I had passed,’ hand and a spade, ruffed high, followed by

Love All. Dealer West. protested West. a top diamond before drawing trumps. He

♠K7 ‘But the point is that I wasn’t thinking!’ wasn’t sure whether to take the diamond

♥642 exclaimed John, as Julie just shook her finesse or not, so he tried the effect of play-

♦AKJ6 head in despair. ‘It was only when I ing out his trumps before deciding, which

♠AQJ982 ♠ 10 3 that I immediately ‘You may substitute your intended looking very smug.

as your partner has not subsequently thrown all of his

called – provided you attempt to do

♠654 that John merely knew that he could

♥AJ made a mechanical so without pause for thought.’ not have the king

♦873 error and therefore of hearts (his open-

said the TD. shown seven points in spades); John then

After an exchange of cue-bids, Julie exited with his jack of hearts, immediately

Julie John to ask for aces, so she bid 5♣ which John lead a diamond away from his queen to let

Pass 5♣ All Pass instead opting for his ace of spades. He until Julie opened the traveller: ‘All that

Weak, 5-9 HCP then decided to lead his ten of diamonds, effort for an average; nearly everyone else

but found that he had placed his ten of was in 3NT making nine tricks. Still, you

Although she had enough points, Julie was hearts on the table instead, so he im- did inadvertently play it very well,’ obser-

uncomfortable with her double of 2♠ as mediately called the Tournament Director. ved Julie in a barbed tone.

her hearts were so poor, and she feared the He explained to the TD: ‘‘I have made an As they left the club Julie turned to John

worst when John eventually put down his inadvertent designation in the play and and said: ‘What is it you keep forgetting to

Stop card. He had taken some time to would like to change my card.’ ask me?’

decide as he really didn’t want to go past The Tournament Director replied: ‘I am John could feel his neck going red as

3NT, but he realised he was too strong just afraid the use of the term “inadvertent” in he nervously enquired: ‘Oh yes, well,

to bid 3♣, and feared that if he tried 3♠ to the play only applies to cards that are Christmas will be here soon and I won-

see if Julie had a stop, it might prompt her named or called for. In this case you have dered whether you would accept an

to bid 4♥. physically played invitation to join me for a Christmas

Unfortunately, ‘A defender's card held so that it is the card and Law Bridge Break.’

after placing the possible for his partner to see its face 45C1 states: “A def- ‘Christmas and you and bridge – how

Stop card on the must be played to the current trick.’ ender’s card held romantic! I don’t think so, John,’ replied

table, John then so that it is possible Julie. ‘I shall settle for the Queen’s Speech

pulled out 3♣. As West placed his Pass for his partner to see its face must be at home instead.’

card on the table, he gave John a sideways played to the current trick’’.’ Crestfallen, John decided to try to suggest

glance which prompted John to look After the heart switch to the queen and something more attractive in the future;

down and gasp in horror at what he had ace, John could see that trumps represented he wondered if ten days at the Brighton

done. his only sensible way back to hand, so he Congress might be a better bet.