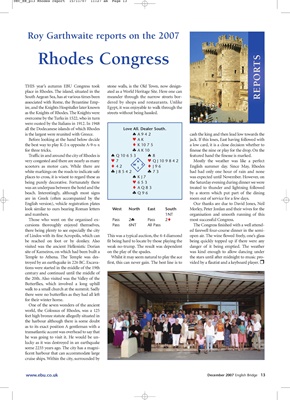 Roy Garthwaite reports on the 2007

place in Rhodes. The island, situated in the ated as a World Heritage Site. Here one can

South Aegean Sea, has at various times been meander through the narrow streets bor-

associated with Rome, the Byzantine Emp- dered by shops and restaurants. Unlike

ire, and the Knights Hospitaller later known Egypt, it was enjoyable to walk through the

as the Knights of Rhodes. The Knights were streets without being hassled.

all the Dodecanese islands of which Rhodes Love All. Dealer South.

is the largest were reunited with Greece. ♠A942 cash the king and then lead low towards the

Before looking at the hand below decide ♥AK jack. If this loses, East having followed with

for three tricks. ♣ A K 10 finesse the nine or play for the drop. On the

scooters as motor cars. While there are ♦ 42 S ♦J96 English summer day. Since May, Rhodes

places to cross, it is wisest to regard these as ♠KJ7 was expected until November. However, on

being purely decorative. Fortunately there ♥653 the Saturday evening during dinner we were

beach. Interestingly, although most signs ♣Q96 by a storm which put part of the dining

are in Greek (often accompanied by the room out of service for a few days.

English version), vehicle registration plates Our thanks are due to David Jones, Neil

look similar to ours bearing Roman letters West North East South Morley, Peter Jordan and their wives for the

and numbers. 1NT organisation and smooth running of this

Those who went on the organised ex- Pass 2♣ Pass 2♦ most successful Congress.

cursions thoroughly enjoyed themselves, Pass 6NT All Pass The Congress finished with a well attend-

of Lindos with its fine Acropolis, which can This was a typical auction, the 4-4 diamond open air. The wine flowed freely, one’s glass

be reached on foot or by donkey. Also fit being hard to locate by those playing the being quickly topped up if there were any

visited was the ancient Hellenistic Dorian weak no-trump. The result was dependent danger of it being emptied. The weather

site of Kameiros, on which had been built a on the play of the spades. was kind enough to allow dancing under

Temple to Athena. The Temple was des- Whilst it may seem natural to play the ace the stars until after midnight to music pro-

troyed by an earthquake in 226 BC. Excava- first, this can never gain. The best line is to vided by a flautist and a keyboard player.

tions were started in the middle of the 19th

century and continued until the middle of

the 20th. Also visited was the Valley of the

Butterflies, which involved a long uphill

walk to a small church at the summit. Sadly

there were no butterflies as they had all left

for their winter home.

One of the seven wonders of the ancient

world, the Colossus of Rhodes, was a 125

the harbour although there is some doubt

as to its exact position A gentleman with a

transatlantic accent was overhead to say that

he was going to visit it. He would be un-

lucky as it was destroyed in an earthquake

ficent harbour that can accommodate large

cruise ships. Within the city, surrounded by