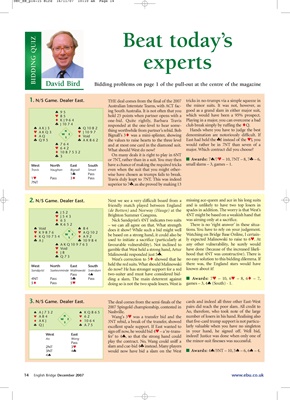 1. N/S Game. Dealer East. THE deal comes from the final of the 2007 tricks in no-trumps via a simple squeeze in

Australian Interstate Teams, with ACT fac- the minor suits. It was not, however, as

♠ 95 ing South Australia. It is not often that you good as a grand slam in either major suit,

♦ KJ964 one-bid. Quite rightly, Barbara Travis Playing in a major, you can overcome a bad

Hands where you have to judge the best

♦ Void Bignall’s 3♦ was a mini-splinter, showing denomination are notoriously difficult. If

♠ 764 and at most one card in the diamond suit. would rather be in 7NT than seven of a

What should West do now? major. Which contract did you choose?

1♣ Pass wise have chosen as trumps fails to break.

1♥ Pass 3♦ Pass Travis duly leapt to 7NT. This was indeed

2. N/S Game. Dealer East. Next we see a very difficult board from a missing ace-queen and ace in his long suits

(de Botton) and Norway (Hauge) at the spades in addition. The worry is that West’s

♥ J543 Brighton Summer Congress. 4NT might be based on a weakish hand that

♦ 63 Nick Sandqvist’s 4NT indicates two suits was aiming only at a sacrifice.

♣ K652 – we can all agree on that. What strength There is no ‘right answer’ in these situa-

♠ Void 84 ♠ does it show? While such a bid might well tions. You have to rely on your judgement.

A92 ♦ be based on a strong hand, it could also be Watching on Bridge Base Online, I certain-

10 9 8 4 used to initiate a sacrifice (particularly at ly expected Malinowski to raise to 6♥. At

♥ Void gamble that West held a strong hand, Artur have done (because of the increased likeli-

♦ J8 hood that 4NT was constructive). There is

West’s correction to 5♦ showed that he no easy solution to this bidding dilemma. If

West North East South held the red suits. What should Malinowski there was, the England stars would have

Sandqvist Saelesnminde Malinowski Svendsen do now? He has stronger support for a red known about it!

Pass 4♠ two-suiter and must have considered bid-

3. N/S Game. Dealer East. The deal comes from the semi-finals of the cards and indeed all three other East-West

2007 Spingold championship, contested in pairs did reach the poor slam. All credit to

♣ QJ ♣ A75 excellent spade support. If East wanted to larly valuable when you have no singleton

West East indeed! Justice was done when only one of

fer’ to 4♠, so that the strong hand could

Pass play the contract. No, Wang could sniff a the minor-suit finesses was successful.