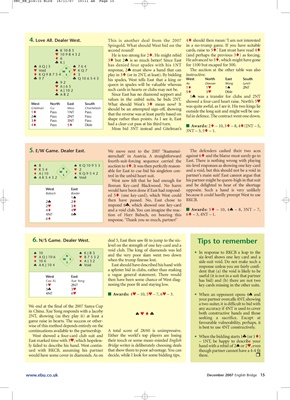 Spingold. What should West bid on the in a no-trump game. If you have suitable

♥ Void W E ♥ K Q 7 response, 2♠ must show a hand that can The auction at the other table was also

♥ AJ65 queen in spades will be valuable whereas

West North East South What should West’s 3♦ mean now? It was quite awful, as I see it. His two kings lie

Gitelman Gu Moss Chechelash should be an attempted sign-off, showing

that the reverse was at least partly based on ful in defence. The contract went one down.

3♦ Pass 3NT Pass shape rather than points. As I see it, East

5. E/W Game. Dealer East. We move next to the 2007 ‘Staatsmei- The defenders cashed their two aces

sterschaft’ in Austria. A straightforward against 6♦ and the blame must surely go to

fourth-suit-forcing sequence carried the East. There is nothing wrong with playing

W E able for East to cue-bid his singleton con- and a void, but this should not be a void in

Roman Key-card Blackwood. No harm and be delighted to hear of the shortage

West East would have been done if East had respond- opposite. Such a hand is very unlikely

ed 5♦ (one key-card), which West could because it could hardly prompt West to use

level on the strength of one key-card and a

void club. The king of diamonds was led

♦ AJ32 when the trump finesse lost. side-suit void. Do not make such a

a splinter bid in clubs, rather than making dent that (a) the void is likely to be

West East a vague general statement. There would useful (it is not in a suit that partner

1♥ 2NT nosing the poor fit and staying low. key cards missing in the other suits.

a two-suiter, it is difficult to bid with

any accuracy if 4NT is used to cover

in China. Xue Yong responds with a Jacoby both constructive hands and those

seeking a sacrifice. Except at

game raise in hearts. The success or other- favourable vulnerability, perhaps, it

wise of this method depends entirely on the is best to use 4NT constructively.

continuations available to the partnership. A total score of 28/60 is unimpressive.

East marked time with 3♥, which hopeless- their touch or some mean-minded English – 1NT, be happy to describe your

ly failed to describe his hand. West contin- Bridge writer is deliberately choosing deals hand with a rebid of 2♠ or 2♥, even

ued with RKCB, assuming his partner that show them to poor advantage. You can though partner cannot have a 4-4 fit

would have some cover in diamonds. As on decide, while I look for some bidding tips. there.