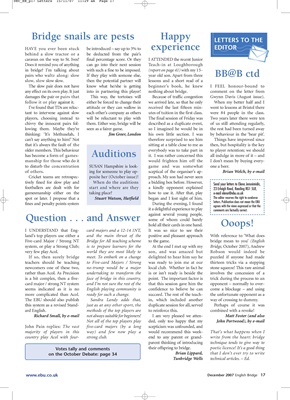 Bridge snails are pests Happy LETTERS TO THE

HAVE you ever been stuck

behind a slow tractor or a

be introduced – say up to 3% to experience EDITOR

be deducted from the pair’s

caravan on the way to St. Ives? final percentage score. Or they I ATTENDED the recent Junior

pairs who waltz along: slow If they play with somone else, year old son. Apart from three BB@B ctd

slow, slow slow slow. then the potential partner will lessons and a short read of a

The slow pair does not have know what he/she is getting beginner’s book, he knew I FEEL honour-bound to

any effect on its own play. It just into in partnering this player! nothing about bridge. comment on the letter from

damages the pair or pairs that This way, the tortoises will Because of traffic congestion Gwynn Davis (August issue).

follow it or play against it. either be forced to change their we arrived late, so that he only When my better half and I

tant to intervene against slow each other’s company as others utes of tuition in the first class. were 84 people in the class.

players, choosing instead to will be reluctant to play with The final session of Friday was Two years later there were ten

chivvy the innocent pairs fol- them. Either way, bridge will be described as a duplicate event, of us still attending regularly,

lowing them. Maybe they’re seen as a fairer game. so I imagined he would be in the rest had been turned away

thinking: ‘It’s Methuselah, I Jim Greer, London his own little section. I was by behaviour in the ‘bear pit’.

can’t say anything to him!’ Not therefore surprised to see him Things have improved since

that it’s always the fault of the sitting at a table close to me as then, but hospitality is the key

older members. This behaviour everybody was to take part in to player retention; we should

has become a form of games- Auditions it. I was rather concerned this all indulge in more of it – and

to disturb the concentration SUSAN Hampshire is look- game and was somewhat one a beer.

of others. ing for someone to play op- sceptical of the organiser’s ap- Brian Welch, by e-mail

tively fined for slow play and When do the auditions a bidding box before. However, Send your letters to Elena Jeronimidis,

footballers are dealt with for start and where are they a kindly opponent explained 23 Erleigh Road, Reading RG1 5LR,

gamesmanship either on the taking place? how to use it. After that, play e-mail elena@ebu.co.uk

spot or later. I propose that a Stuart Watson, Hatfield began and I lost sight of him. The editor reserves the right to condense

letters. Publication does not mean the EBU

fines and penalty points system During the evening, I found agrees with the views expressed or that the

it a delightful experience to play comments are factually correct.

Question . . . and Answer some of whom could barely

hold all their cards in one hand. Ooops!

Five-card Major / Strong NT Bridge for All teaching scheme to the game. bridge mean to you’ (English

system, or play a Strong Club; is to prepare learners for the At the end I met up with my Bridge, October 2007), Andrew

very few play Acol. world they are most likely to son, and was amazed but Robson would indeed be

If so, then surely bridge meet. To embark on a change delighted to hear him say he puzzled if anyone had made

newcomers one of these two, no-trump would be a major local club. Whether in fact he stone squeeze! This rare animal

rather than Acol. As Precision undertaking to transform the is or isn’t ready is beside the involves the concession of a

is a bit complex, then a five- face of bridge in this country, point. The important factor is trick during the process to an

more complicated than Acol. ready for such a change. succeed. The rest of the teach- the unfortunate opponent as a

The EBU should also publish Sandra Landy adds that, in, which included another way of crossing to dummy.

this system as a revised Stand- just as at any other sport, the duplicate session for all, served Perhaps of course it was

ard English. methods of the top players are to reinforce this. combined with a revoke!

Richard Small, by e-mail not always suitable for beginners! I am very pleased we atten- Matt Foster (and also

Not all of the top players play ded, only too happy that my John Portwood), by e-mail

John Pain replies: The vast five-card majors (by a long scepticism was unfounded, and

country play Acol with four- strong club. end to any parent or grand- write from the heart: bridge

parent thinking of introducing technique tends to give way to

on the October Debate: page 34 Brian Lippard, that I don’t ever try to write