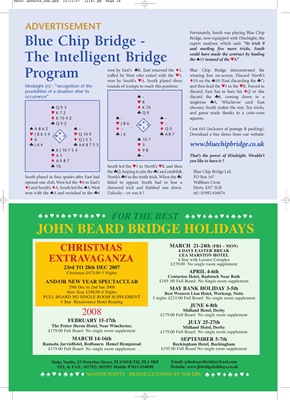 expert analyser, which said: “At trick 9

The Intelligent Bridge could have made the contract by leading

ruffed by West who exited with the ♥5,

Hindsight (n) : “recognition of the rounds of trumps to reach this position: and then lead the ♥3 to the ♥K. Forced to

possibilities of a situation after its discard, East has to bare his ♦Q or else

the ♣Q, hoping to pin the ♣J and establish Blue Chip Bridge Ltd.

South played in four spades after East had North’s ♣9 as the tenth trick. When the ♣J PO Box 167

opened one club. West led the ♦6 to East’s failed to appear, South had to lose a Waltham Cross

AND/OR NEW YEAR SPECTACULAR £185 .00 Full Board No Single room supplement

£179.00 Full Board No single room supplement