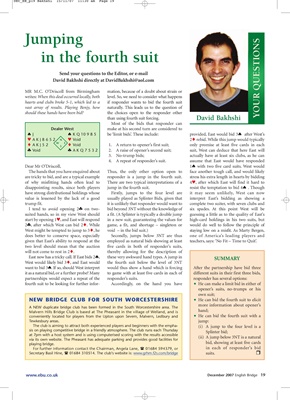 in the fourth suit

MR M.C. O’Driscoll from Birmingham mation, because of a doubt about strain or

writes: When this deal occurred locally, both level. So, we need to consider what happens

hearts and clubs broke 5-1, which led to a if responder wants to bid the fourth suit

vast array of results. Playing Benjy, how naturally. This leads us to the question of

should these hands have been bid? the choices open to the responder other

Most of the bids that responder can

Dealer West make at his second turn are considered to

♦ AKJ52 S ♦ Void 1. A return to opener’s first suit; only promise at least five cards in each

3. No-trump bids; actually have at least six clubs, as he can

4. A repeat of responder’s suit. assume that East would have responded

The hands that you have enquired about Thus, the only other option open to face another tough call, and would likely

are tricky to bid, and are a typical example responder is a jump in the fourth suit. stress his extra length in hearts by bidding

of why misfitting hands often lead to There are two typical interpretations of a 4♥, after which East will find it hard to

disappointing results, since both players jump in the fourth suit. resist the temptation to bid 4♠ . Though

have strong distributional holdings whose Firstly, jumps to the four level are it may seem unlikely, West can now

value is lessened by the lack of a good usually played as Splinter Bids, given that interpret East’s bidding as showing a

trump fit. it is unlikely that responder would want to complete two suiter, with seven clubs and

I tend to avoid opening 2♣ on two- bid beyond 3NT without the knowledge of six spades. At this point West will be

suited hands, so in my view West should a fit. (A Splinter is typically a double jump guessing a little as to the quality of East’s

start by opening 1♥, and East will respond in a new suit, guaranteeing the values for high-card holdings in his two suits, but

2♣, after which West can bid 2♦. While game, a fit, and shortage – singleton or would do well to follow the principle of

West might be tempted to jump to 3♦, he void – in the bid suit.) staying low on a misfit. As Marty Bergen,

does better to conserve space, especially Secondly, jumps below 3NT are thus one of America’s leading players and

given that East’s ability to respond at the employed as natural bids showing at least teachers, says: ‘No Fit – Time to Quit’.

two level should mean that the auction five cards in both of responder’s suits,

will not come to rest in 2♦. thereby allowing for the description of

East now has a tricky call. If East bids 2♠, these very awkward hand types. A jump in SUMMARY

West would likely bid 3♦, and East would the fourth suit below the level of 3NT

want to bid 3♠. If so, should West interpret would thus show a hand which is forcing After the partnership have bid three

it as a natural bid, or a further probe? Many to game with at least five cards in each of different suits in their first three bids,

partnerships would expect a repeat of the responder’s suits. responder has several options:

fourth suit to be looking for further infor- Accordingly, on the hand you have • He can make a limit bid in either of

opener’s suits, no-trumps or his

A NEW duplicate bridge club has been formed in the South Worcestershire area. The

Malvern Hills Bridge Club is based at The Pheasant in the village of Welland, and is hand;

conveniently located for players from the Upton upon Severn, Malvern, Ledbury and

• He can bid the fourth suit with a

sis on playing competitive bridge in a friendly atmosphere. The club runs each Thursday Splinter bid;

via its own website. The Pheasant has adequate parking and provides good facilities for

(ii) A jump below 3NT is a natural

For further information contact the Chairman, Angela Lane, 01684 594379, or in each of responder’s bid