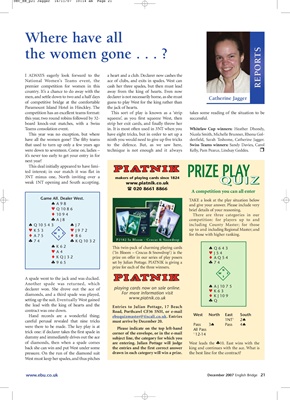 I ALWAYS eagerly look forward to the a heart and a club. Declarer now cashes the

National Women’s Teams event, the ace of clubs, and exits in spades. West can

premier competition for women in this cash her three spades, but then must lead

country. It’s a chance to do away with the away from the king of hearts. Even now

men, and settle down to two and a half days declarer is not necessarily home, as she must Catherine Jagger

Paramount Island Hotel in Hinckley. The the jack of hearts.

competition has an excellent teams format: This sort of play is known as a ‘strip takes some reading of the situation to be

this year, two round robins followed by 32- squeeze’, as you first squeeze West, then successful.

board knock-out matches, with a Swiss strip her exit cards, and finally throw her

Teams consolation event. in. It is most often used in 3NT when you Whitelaw Cup winners: Heather Dhondy,

This year was no exception, but where have eight tricks, but in order to set up a Nicola Smith, Michelle Brunner, Rhona Gol-

have all the women gone? The fifty teams ninth you would need to give up five tricks denfield, Sarah Teshome, Catherine Jagger.

that used to turn up only a few years ago to the defence. But, as we saw here, Swiss Teams winners: Sandy Davies, Carol

were down to seventeen. Come on, ladies – technique is not enough and it always Kelly, Pam Pearce, Lindsay Geddes.

it’s never too early to get your entry in for

This deal initially appeared to have limi-

ted interest; in our match it was flat in

3NT minus one, North inviting over a makers of playing cards since 1824

A competition you can all enter

Game All. Dealer West. TAKE a look at the play situation below

♠A98 and give your answer. Please include very

♣AJ8 competition: for players up to and

♦KQJ32 prize on offer in our series of play posers ♦ AQ54

prize for each of the three winners.

A spade went to the jack and was ducked.

Another spade was returned, which

declarer won. She drove out the ace of ♥ K63

diamonds, and a third spade was played, For more information visit

the lead with the king of hearts and the Entries to Julian Pottage, 17 Beach

contract was one down. Road, Porthcawl CF36 5NH, or e-mail

Please indicate on the top left-hand All Pass

trick one: if declarer takes the first spade in corner of the envelope, or in the e-mail 1

dummy and immediately drives out the ace subject line, the category for which you

of diamonds, then when a spade comes are entering. Julian Pottage will judge West leads the ♣10. East wins with the

back she can win and put West under some the entries and the first correct answer king and continues with the ace. What is

pressure. On the run of the diamond suit drawn in each category will win a prize. the best line for the contract?

West must keep her spades, and thus pitches