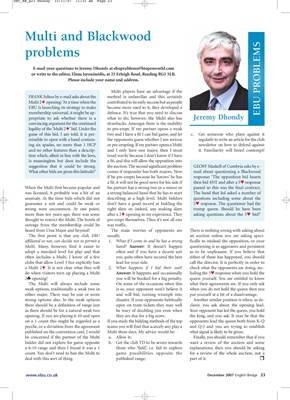 Multi players have an advantage if the

Multi 2♦ opening: ‘At a time when the contributed to its early success but as people

EBU is launching its strategy to make became more used to it, they developed a

membership universal, it might be ap- defence. It’s true that you need to discuss

propriate to ask whether there is a what to do; however, the Multi also has Jeremy Dhondy

convincing argument for the continued drawbacks. Amongst them is the inability

legality of the ‘Multi 2♦’ bid. Under the to pre-empt. If my partner opens a weak

guise of this bid, I am told, it is per- two and I have a fit I can bid game, and let c. Get someone who plays against it

ing six spades, no more than 1 HCP or pre-empting. If my partner opens a Multi newsletter on how to defend against

and no other features than a descrip- and I only have one major, then I must it. Familiarity will breed contempt!

tion which, albeit in line with the laws, tread warily because I don’t know if I have

is meaningless but does include the a fit, and this will allow the opposition into

suggestion that it could be strong. the auction. The second significant problem GEOFF Maskell of Cumbria asks by e-

What other bids are given this latitude?’ comes if responder has both majors. Now mail about questioning a Blackwood

if he pre-empts because he ‘knows’ he has response: ‘The opposition bid hearts

a fit, it will not be good news for his side if then bid 4NT and after a 5♥ response

When the Multi first became popular and his partner has a strong two in a minor or passed so this was the final contract.

was licensed, it probably was a bit of an a strong balanced hand that he has to start The hand that led asked a number of

anomaly. At the time bids which did not describing at a high level. Multi bidders questions including some about the

guarantee a suit and could be weak or don’t have a good record at bidding the 5♥ response. The questioner had the

strong were uncommon. At one point, right slam or, indeed, any making slam trump queen. Should he have been

more than ten years ago, there was some after a 2♦ opening in my experience. They asking questions about the 5♥ bid?’

thought to restrict the Multi. The howls of pre-empt themselves. Thus it’s not all one

outrage from the membership could be way traffic.

heard from Ursa Major and beyond! The main worries of opponents are There is nothing wrong with asking about

The first point is that any club, EBU usually an auction unless you are asking speci-

affiliated or not, can decide not to permit a 1. What if I come in and he has a strong fically to mislead the opposition, or your

Multi. Many, however, find it easier to hand? Answer: It doesn’t happen questioning is so aggressive and persistent

adopt a standard level for play and that often and if you have a decent suit as to be unpleasant. If you believe that

often includes a Multi. I know of a few you quite often have secured the best either of these has happened, you should

clubs that allow Level 3 but explicitly ban lead for your side. call the director. It is perfectly in order to

a Multi 2♦. It is not clear what they will 2. What happens if I bid their suit? check what the opponents are doing, inc-

do when visitors turn up playing a Multi Answer: It happens and occasionally luding the 5♥ response when you hold the

2♣ opening! you will be booked for a big penalty. queen yourself. You are entitled to know

The Multi will always include some On some of the occasions when this what their agreements are. If you only ask

weak options, traditionally a weak two in is so, your opponent won’t believe it when you do not hold the queen then you

either major. There may be one or more and will bid, turning triumph into put yourself at a bit of a disadvantage.

strong options also. In the weak options disaster. If your opponents habitually Another similar position is when, as de-

there should be a definition of range just open on tram tickets they may well clarer, you ask about the opening lead.

as there should be for a natural weak two be wary of doubling you even when Your opponent has led the queen, you hold

opening. If you are playing 6-10 and open they are due for a big score. the king, and you ask. It may be that the

psyche, or a deviation from the agreement teams you will find that scarcely any play a and Q-J and you are trying to establish

published on the convention card. I would Multi these days. My advice would be: what signal is likely to be given.

be concerned if the partner of the Multi a. Allow it; Finally, you should remember that if you

bidder did not explore for game opposite b. Get the club TD to be severe towards want a review of the auction and some

a 6-10 range and then I found it was a 1 those who ‘field’, i.e. fail to explore explanations, then you should be asking

count. You don’t need to ban the Multi to game possibilities opposite the for a review of the whole auction, not a

deal with this sort of thing. published range; part of it.