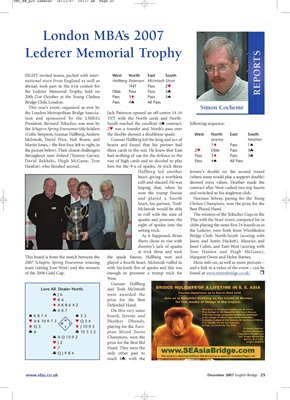 This year’s event, organised as ever by Simon Cochemé

Martin Jones, – the first four, left to right, in hearts and found that his partner had 1♦ Pass 1♠

the picture below). Their closest challengers three cards in the suit. He knew that East 2♥ Dble Pass 3♣

throughout were Ireland (Tommy Garvey, had nothing of use for the defence in the Pass 3♦ Pass 3♠

Hanlon), who finished second. him for the 9-x of spades. At trick three

Hallberg led another Jeremy’s double on the second round

heart, giving a worthless (where some would play a support double)

ruff-and-discard. He was showed extra values. Heather made the

hoping that, when he contract after West cashed two top hearts

won the trump finesse and switched to his singleton club.

and played a fourth Norman Selway, paying for the Young

heart, his partner, ‘Tosh’ Chelsea Champions, won the prize for the

spades and promote the ‘Play with the Stars’ event, competed for in

setting trick. the Lederer, were both from Wimbledon

As it happened, Brian Bridge Club: North-South (scoring with

Short chose to rise with Jason and Justin Hackett), Maurice and

dummy’s jack of spades Janet Cahm, and East-West (scoring with

at trick three and took Tom Hanlon and Hugh McGann),

This board is from the match between the the spade finesse. Hallberg won and Margaret Owen and Helen Barnes.

of the 2006 Gold Cup. enough to promote a trump trick for found at www.metrobridge.co.uk/

♠J6 were awarded the

♣AK7 On this very same

♥J2 prize for the Best Bid