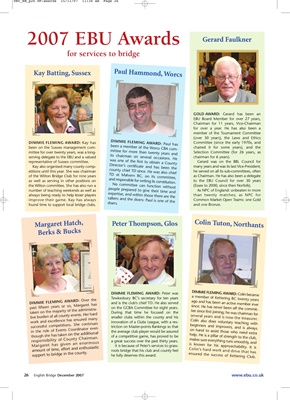 for services to bridge

GOLD AWARD: Gerard has been an

Photo: EBU EBU Board Member for over 27 years,

for over a year. He has also been a

member of the Tournament Committee

been on the Sussex management com- been a member of the chaired it for some years), and the

mittee for over twenty years, was a long- mittee for more than Selection Committee (for 26 years, as

serving delegate to the EBU and a valued its chairman on severa chairman for 6 years).

representative of Sussex committee. was one of the first to Gerard was on the BBL Council for

Kay also organised many county comp- Director’s certificate and many years and was its last Vice-President;

etitions until this year. She was chairman county chief TD since. he served on all its sub-committees, often

He was also chief

of the Wilton Bridge Club for nine years TD at Malvern BC, on as Chairman. He has also been a delegate

the Wilton committee. She has also run a No committee can fun (Essex to 2000, since then Norfolk).

number of teaching weekends as well as people prepared to giv As NPC of England: unbeaten in more

e their time and

always being ready to help lesser players expertise, and within tho than twenty matches; as NPC for

se there are the

improve their game. Kay has always talkers and the doers: Common Market Open Teams: one Gold

Paul is one of the

Tewkesbury BC’s secretary for ten years a member of Kettering

ARD: Over the ago and has been an act

DIMMIE FLEMING AW and is the club’s chief TD. He also served ive member ever

past fifteen yea rs or so, Margaret has on the GCBA Committee for eight years. since. He has never bee

n off the commit-

of the administra- tee since first joining; he

tive burden of all county events. Her hard smaller clubs within the county and his several years and is no

has ensured many Colin also does volunt

work and excellence innovation of a Clubs League, with a res- ary teaching with

ns. She continues beginners and improv

successful competitio triction on Master-points Rankings so that ers, and is always

Coordinator even on hand to assist those

though she has taken on the addition of a competitive game, has proved to be help. He is a pillar of stre

res po nsi bil ity of Co un a great success over the past thirty years. makes sure everything

an en orm ou s is known for his app

Ma rga ret ha s giv en It is because of Peter’s services to grass- roachability. It is

amount of time, effort roots bridge that his club and county feel Co lin ’s ha rd wo rk an

support to bridge in the he fully deserves this award. ensured the success of