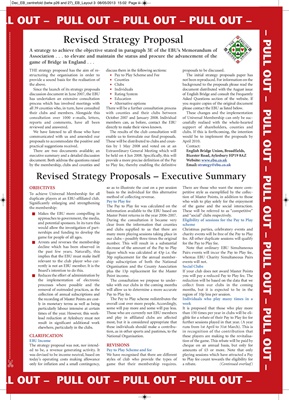 Association . . . to elevate and maintain the status and procure the advancement of the

THE strategy proposed has the aim of re- discuss them in the following sections: proposals to be discussed.

provide a sound basis for the realisation of • Counties not been reproduced. For information on the

the above. • Clubs background to the proposals please read the

discussion document in June 2007, the EBU • Rating System of English Bridge and consult the Frequently

has undertaken an extensive consultation • Education Asked Questions section of the website. If

all 39 counties who, in turn, have consulted There will be a further consultation process please contact the EBU as listed below.

their clubs and members. Alongside this with counties and their clubs between These changes and the implementation

consultation over 1000 e-mails, letters, October 2007 and January 2008. Individual of Universal Membership can only be suc-

reports and comments, have all been members can, as before, contact the EBU cessfully realised with the whole-hearted

reviewed and answered. directly to make their views known. support of shareholders, counties and

We have listened to all those who have The results of the club consultation will clubs. If this is forthcoming, the intention

communicated with us and amended our enable us to formulate our final proposals. would be to implement the proposals by

proposals to accommodate the positive and These will be distributed to clubs and coun- April 2010.

practical suggestions received. ties by 1 May 2008 and voted on at an Contact:

There are two documents available; an Extraordinary General Meeting which will English Bridge Union, Broadfields,

executive summary and a detailed discussion be held on 4 Jun 2008. Specifically, this will Bicester Road, Aylesbury HP19 8AZ

document. Both address the questions raised provide a more precise definition of the Pay Website: www.ebu.co.uk

by the membership, clubs and counties and to Play fee, thereby enabling the definitive Email: strategy@ebu.co.uk

duplicate players at an EBU-affiliated club. method of collecting revenue. tion of Master Points, in addition to those

the membership: The Pay to Play fee was calculated on the of the game and the social interaction.

approaches to government, the media, During the consultation it became very Eligibility of sessions for the Pay to Play

and potential sponsors. In its turn this clear from the information that counties scheme

would allow the investigation of part- and clubs supplied to us that there are Christmas parties, celebratory events and

game for people of all ages. our clubs – possibly three times the original fee. All other duplicate sessions will qualify

n Arrests and reverses the membership number. This will result in a substantial for the Pay to Play fee.

the past few years. Naturally, this figure which was calculated at 43p i.e. the Pairs events will incur the Pay to Play fee,

relevant to the club player who cur- ship subscription of both the National events will not.

rently is not an EBU member. It is the Organisation and the County Association Social Clubs

Board’s intention to do this. plus the 13p replacement for the Master If your club does not award Master Points

n Reduces the effort of administration by Point income. you will pay a reduced Pay to Play fee. The

removal of outmoded practices, as the will allow us to determine a more accurate months, but it is expected to be in the

collection of annual subscriptions and Pay to Play fee. region of 10p less per session.

ly in monetary terms as well as being overall cost over more people. Accordingly, week

times of the year. However, this work- Those who are currently not EBU members than 150 times per year in clubs will be eli-

result in significant additional work most, but it is considered appropriate that further sessions played in that year. (A year

elsewhere, particularly in the clubs. these individuals should make a contribu- runs from 1st April to 31st March). This is

tion, as in other sports and pastimes, to the in recognition of the contribution that

CLARIFICATION National Organisation. these players are making to the revitalisa-

EBU Income tion of the game. This rebate will be paid by

The strategy proposal was not, nor intend- REVISIONS cheque on an annual basis, but only for

ed to be, a revenue generating activity. It Pay to Play Scheme and fee amounts of £5 or more. Note that only

was devised to be income neutral, based on We have recognised that there are different playing sessions which have attracted a Pay

only for inflation and a small contingency, game that their membership requires. a rebate. (Continued overleaf)