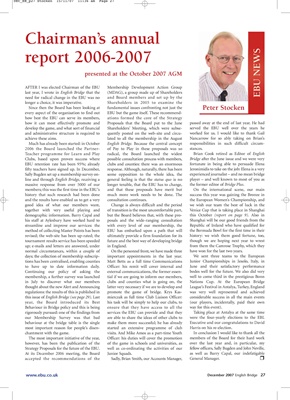 presented at the October 2007 AGM

last year, I wrote in English Bridge that the (MDAG), a group made up of Shareholders

longer a choice, it was imperative. Shareholders in 2005 to examine the

every aspect of the organisation to find out EBU but the game itself. These recommend-

how best the EBU can serve its members, ations formed the core of the Strategy

how it can most effectively promote and Proposals that the Board put to the June passed away at the end of last year. He had

develop the game, and what sort of financial Shareholders’ Meeting, which were subse- served the EBU well over the years he

and administrative structure is required to quently posted on the web-site and circu- worked for us. I would like to thank Gail

achieve these aims. lated to all the membership in the August Nancarrow for so ably taking on Brian’s

Much has already been started: in October English Bridge. Because the central concept responsibilities in such difficult circum-

2006 the Board launched the Partner- of Pay to Play in these proposals was so stances.

Teacher programme for Learn and Play radical, the Board launched the widest Brian Cook retired as Editor of English

Clubs, based upon proven success where possible consultation process with members, Bridge after the June issue and we were very

EBU retention rate has been 95%; already clubs and counties: there was an enormous fortunate in being able to persuade Elena

fifty teachers have signed up. In December, response. Although, naturally, there has been Jeronimidis to take on the job: Elena is a very

Sally Bugden set up a membership survey on- some opposition to the whole idea, the experienced journalist – and no mean bridge

line and through English Bridge, receiving a general feeling is that the status quo is no player – and well known to most of you as

massive response from over 5000 of our longer tenable, that the EBU has to change, the former editor of Bridge Plus.

members; this was the first time in the EBU’s and that these proposals have merit but On the international scene, our main

history that such research had been done much more work needs to be done. The success this year was gaining the Bronze in

and the results have enabled us to get a very consultation continues. the European Women’s Championship, and

good idea of what our members want, Change is always difficult and the period we wish our team the best of luck in the

together with very useful playing and of transition is the most uncomfortable part, Venice Cup that is taking place in Shanghai

demographic information. Barry Capal and but the Board believes that, with these pro- this October (report on page 9). Also in

streamline and improve our services: the with every level of our membership, the Republic of Ireland who have qualified for

revised; the web-site has been up-rated; the ultimately provide a firm foundation for its history: we wish them good fortune, too,

up; e-mails and letters are answered, under in England. from them the Camrose Trophy, which they

normal circumstances, within a couple of On the personnel front, we have made three have won for the last two years.

days; the collection of membership subscrip- important appointments in the last year. We sent three teams to the European

tions has been centralised, enabling counties Matt Betts as a full time Communications Junior Championships in Jesolo, Italy, in

to have up to date information daily. Officer: his remit will cover internal and June and their satisfactory performance

Continuing our policy of asking the external communications, the former essen- bodes well for the future. We also did very

membership, a further survey was launched tial if we are going to inform our members, well to come third in the prestigious Bonn

in July to discover what our members clubs and counties what is going on, the Nations Cup. At the European Bridge

thought about the new Alert and Announcing latter very necessary if we are to develop and League’s Festival in Antalya, Turkey, England

regulations: the results of this is published in promote the game of bridge. Krys Kas- was very well represented and achieved

year, the Board introduced its Best his task will be simply to help our clubs, to (our players, incidentally, paid their own

Behaviour in Bridge policy and this is being ensure that they have access to all the way for this event).

rigorously pursued: one of the findings from services the EBU can provide and that they Taking place at Antalya at the same time

behaviour at the bridge table is the single make them more successful; he has already Executive and our congratulations to David

most important reason for people’s disen- started an extensive programme of club Harris on his re-election.

chantment with the game. visits. And Mike Amos as a part-time Youth In conclusion I would like to thank all the

The most important initiative of the year, Officer: his duties will cover the promotion members of the Board for their hard work

however, has been the publication of the of the game in schools and universities, as over the last year and, in particular, my

Strategy Proposals for the future of the EBU. well as co-ordinating the activities of our fellow officers, Sally Bugden and John Neville,

At its December 2006 meeting, the Board Junior Squads. as well as Barry Capal, our indefatigable

accepted the recommendations of the Sadly, Brian Smith, our Accounts Manager, General Manager.