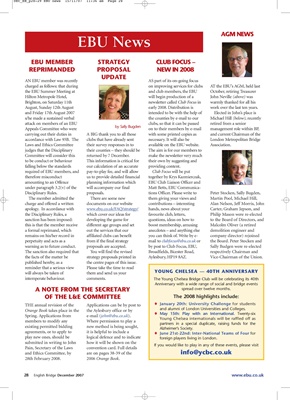 AN EBU member was recently

UPDATE AS part of its on-going focus

charged as follows: that during on improving services for clubs AT the EBU’s AGM, held last

the EBU Summer Meeting at and club members, the EBU October, retiring Treasurer

Hilton Metropole Hotel, will begin production of a John Neville (above) was

Brighton, on Saturday 11th newsletter called Club Focus in warmly thanked for all his

s/he made a sustained verbal the counties by e-mail to our Michael Hill (below), recently

attack on members of an EBU clubs, so that it can be passed retired from a senior

Appeals Committee who were on to their members by e-mail management role within BP,

accordance with Law 93B. The clubs that have already sent necessary. It will also be London Metropolitan Bridge

Laws and Ethics Committee their survey responses in to available on the EBU website. Association.

Committee will consider this returned by 7 December. make the newsletter very much

falling below the standards our calculation of an accurate providing content.

required of EBU members, and pay-to-play fee, and will allow Club Focus will be put

therefore misconduct us to provide detailed financial together by Krys Kazmierczak,

under paragraph 3.2(v) of the will accompany our final Matt Betts, EBU Communica-

The member admitted the There are some new them giving your views and Martin Pool, Michael Hill,

apology. In accordance with www.ebu.co.uk/FAQ/strategy/ hands, news about your Carter, Graham Jepson, and

the Disciplinary Rules, a which cover our ideas for favourite club, letters, Philip Mason were re-elected

sanction has been imposed: developing the game for questions, ideas on how to to the Board of Directors, and

this is that the member receive different age groups and set boost membership, amusing Malcolm Oliver (a retired

a formal reprimand, which out the services that our anecdotes – and anything else demolition engineer and

remains on his/her record in affiliated clubs can benefit you can think of. Write by e- company director) rejoined

perpetuity and acts as a from if the final strategy mail to clubfocus@ebu.co.uk or the Board. Peter Stocken and

warning as to future conduct. proposals are accepted. by post to Club Focus, EBU, Sally Budgen were re-elected

The sanction also required that You will find the revised Broadfields, Bicester Road, respectively Chairman and

the facts of the matter be strategy proposals printed in Aylesbury, HP19 8AZ. Vice-Chairman of the Union.

published hereby, as a the centre pages of this issue.

reminder that a serious view Please take the time to read

intemperate behaviour. comments. The Young Chelsea Bridge Club will be celebrating its 40th

Anniversary with a wide range of social and bridge events

A NOTE FROM THE SECRETARY spread over twelve months.

OF THE L&E COMMITTEE The 2008 highlights include:

THE annual revision of the Applications can be by post to ♦ January 20th: University Challenge for students

Orange Book takes place in the the Aylesbury office or by and alumni of London Universities and Colleges.

Spring. Applications from e-mail (john@ebu.co.uk). ♦ May 15th: Play with an International. Twenty-six

Young Chelsea internationals will be raffled off as

members to modify any Where permission to play a

partners in a special duplicate, raising funds for the

agreements, or to apply to it is helpful to include a ♦ June 21st-22nd: Inter-National Teams of Four for

play new ones, should be logical defence and to indicate foreign players living in London.

If you would like to play in any of these events, please visit

and Ethics Committee, by are on pages 38-39 of the info@ycbc.co.uk