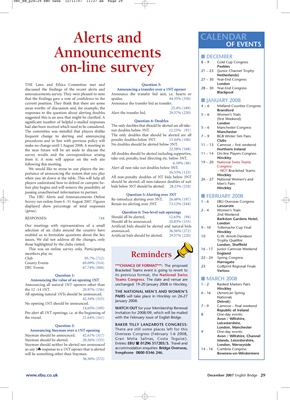 THE Laws and Ethics Committee met and Question 3: London

announcements survey. They were pleased to note Announce the transfer bid suit, i.e. hearts or Blackpool

current position. They think that there are some Announce the transfer bid as transfer.

responses to the question about alerting doubles Alert the transfer bid. 29.57% (220) 5–6 Women’s Trials

suggested this is an area that might be clarified. A (first Weekend)

had also been received which need to be considered. The only doubles that should be alerted are all take- 5–6 Manchester Congress

The committee was mindful that players dislike out doubles below 3NT. 12.23% (91) Manchester

procedures and in line with previous policy will penalty doubles below 3NT. 13.44% (100) Clubs

survey results and the correspondence arising All doubles should be alerted including supportive, 11 – 14 On-line Players Congress

from it. A note will appear on the web site take out, penalty, lead directing etc. below 3NT. Hinckley

Alert all non take out doubles below 3NT. Congress

when you sit down at the table. This will help all All non-penalty doubles of NT bids below 3NT

players understand how to defend or compete be- should be alerted; all non-takeout doubles of suit Men’s Pairs

fore play begins and will remove the possibility of bids below 3NT should be alerted. 28.23% (210) Hinckley

The EBU Alerts and Announcements Online

selection of six clubs around the country have announced. 36.56% (272) Hinckley

enabled us to formulate questions about the key Artificial bids should be alerted. 29.57% (220) 10 G.W. Arnott-Davidson

issues. We did not address all the changes, only Trophy Qualifier

those highlighted by the clubs visited. London, Sheffield

This was an online survey only. Participating 16 - 17 Junior Camrose Weekend

Bracketed Teams event is going to revert to Various

Announcing the value of an opening 1NT Teams Congress. The date and venue are I MARCH 2008

All opening natural 1NTs should be announced.

PAIRS will take place in Hinckley on 26-27 Nationals

No opening 1NT should be announced.

Pre-alert all 1NT openings. i.e. at the beginning of Invitation for 2008/09, which will be mailed 8 One-day events:

Stayman should neither be alerted nor announced Entries: EBU 01296 317203/5. Travel and London, Merseyside

so any 2♣ response to a 1NT opener that is alerted accommodation enquiries: Bridge Overseas, 14 - 16 Cumbria Congress

will be something other than Stayman. freephone 0800 0346 246. Bowness-on-Windermere