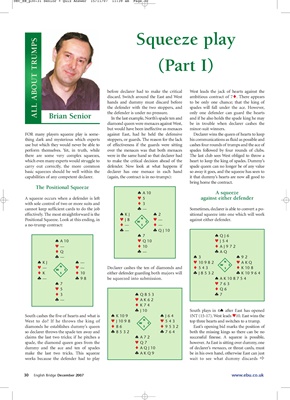 discard. Switch around the East and West ambitious contract of 7♦. There appears

hands and dummy must discard before to be only one chance; that the king of

the defender with the two stoppers, and spades will fall under the ace. However,

the defender is under no pressure. only one defender can guard the hearts

Brian Senior In the last example, North’s spade ten and and if he also holds the spade king he may

diamond queen were menaces against West, be in trouble when declarer cashes the

but would have been ineffective as menaces minor-suit winners.

FOR many players squeeze play is some- against East, had he held the defensive Declarer wins the queen of hearts to keep

thing dark and mysterious which experts stoppers, or guards. The reason for the lack his communications as fluid as possible and

perform themselves. Yet, in truth, while over the menaces was that both menaces spades followed by four rounds of clubs.

there are some very complex squeezes, were in the same hand so that declarer had The last club sees West obliged to throw a

which even many experts would struggle to to make the critical decision ahead of the heart to keep the king of spades. Dummy’s

carry out correctly, the more common defender. Now look at what happens if spade queen can no longer be of any value

basic squeezes should be well within the declarer has one menace in each hand so away it goes, and the squeeze has seen to

capabilities of any competent declarer. (again, the contract is in no-trumps): it that dummy’s hearts are now all good to

with sole control of two or more suits and ♦ 3

cannot keep sufficient cards to do the job ♣ — Sometimes, declarer is able to convert a po-

effectively. The most straightforward is the ♠ KJ ♠ 2 sitional squeeze into one which will work

Positional Squeeze. Look at this ending, in ♥ J8 W E

♥ 543 top three hearts and switches to a trump.

claims the last two tricks; if he pitches a ♠ A72 successful finesse. A squeeze is possible,

spade, the diamond queen goes from the ♥ Q7 however. As East is sitting over dummy, one

dummy and the ace and ten of spades ♦ A Q J 10 of declarer’s menaces, or threat cards, must

make the last two tricks. This squeeze ♣ AKQ9 be in his own hand, otherwise East can just