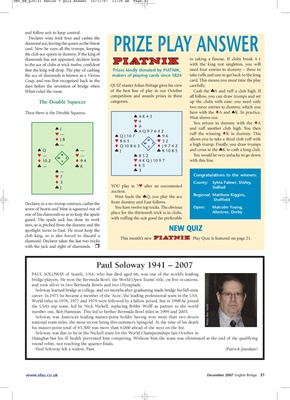 diamond ace, leaving the queen as the threat

card. Now he runs all the trumps, keeping

the club ace-queen in dummy. If the king of

diamonds has not appeared, declarer leads to taking a finesse. If clubs break 4-1

to the ace of clubs at trick twelve, confident with the king not singleton, you will

that the king will drop. The play of cashing Prizes kindly donated by PIATNIK, need four entries to dummy – three to

Coup, and was first recognised back in the card. This means you must time the play

days before the invention of bridge when QUIZ master Julian Pottage gives his view carefully.

Whist ruled the roost. of the best line of play in our October Cash the ♣A and ruff a club high. If

competition and awards prizes in three all follow, you can draw trumps and set

The Double Squeeze categories. up the clubs with ease: you need only

two more entries to dummy, which you

Then there is the Double Squeeze. have with the ♦A and ♠K. In practice,

and ruff another club high. You then

♥ 7 Congratulations to the winners:

♣ J YOU play in 7♥ after an uncontested Solihull

Declarer, in a no-trump contract, cashes the from dummy and East follows.

seven of hearts and West is squeezed out of You have twelve top tricks. The obvious Open: Malcolm Young,

place for the thirteenth trick is in clubs, Allestree, Derby

one of his diamonds so as to keep the spade

guard. The spade jack has done its work with ruffing the suit good far preferable

now, so is pitched from the dummy and the

spotlight turns to East. He must keep the NEW QUIZ

club king, so is also forced to discard a

This month’s new Play Quiz is featured on page 21.

with the jack and eight of diamonds.

PAUL SOLOWAY of Seattle, USA, who has died aged 66, was one of the world’s leading

and took silver in two Bermuda Bowls and two Olympiads.

Soloway learned bridge at college, and six months after graduating made bridge his full-time

career. In 1971 he became a member of the ‘Aces’, the leading professional team in the USA.

the USA’s top team, led by Nick Nickell, replacing Bobby Wolff as partner to the world

national team titles, the most recent being this summer’s Spingold. At the time of his death

Shanghai but his ill health prevented him competing. Without him the team was eliminated at the end of the qualifying

round robin, not reaching the quarter-finals.