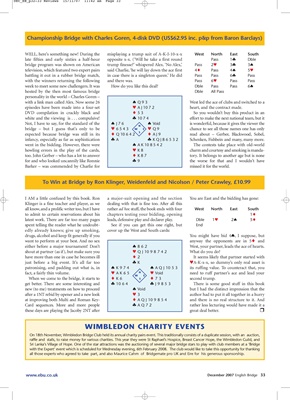 WELL, here’s something new! During the misplaying a trump suit of A-K-J-10-x-x West North East South

late fifties and early sixties a half-hour opposite x-x. (‘Will he take a first round Pass 1♣ Dble

television, which featured two expert pairs said Charlie, ‘he will lay down the ace first 4♦ Pass 4♠ 5♥

battling it out in a rubber bridge match, in case there is a singleton queen.’ He did Pass Pass 6♣ Pass

with the winners returning the following and there was. Pass 6♥ Pass Pass

week to meet some new challengers. It was How do you like this deal? Dble Pass Pass 6♠

hosted by the then most famous bridge Dble All Pass

personality in the world – Charles Goren –

with a link man called Alex. Now some 26 ♠ Q93 West led the ace of clubs and switched to a

♠ Void is wonderful, because it gives the viewer the

infancy, especially as far as sophistication ♣ A ♣ KQJ86532 Schenken, Fishbein and many, many more.

howling errors in the play of the cards, ♥ K8 charm and courtesy and smoking is manda-

too. John Gerber – who has a lot to answer ♦ K87 tory. It belongs to another age but is none

Barker – was commended by Charlie for missed it for the world.

To Win at Bridge by Ron Klinger, Weidenfeld and Nicolson / Peter Crawley, £10.99

I AM a little confused by this book. Ron a major-suit opening and the section You are East and the bidding has gone:

Klinger is a fine teacher and player, as we dealing with that is fine too. After all this

all know, and a prolific writer too, but I have rather ad hoc stuff, the book ends with four West North East South

to admit to certain reservations about his chapters testing your bidding, opening 1♦

latest work. There are far too many pages leads, defensive play and declarer play. Dble 1♥ 2♠ 5♦

spent telling the reader what he undoubt- See if you can get this one right, but End

edly already knows; give up smoking, cover up the West and South cards:

drugs, alcohol and keep fit generally if you You might have bid 4♠, I suppose, but

want to perform at your best. And no sex anyway the opponents are in 5♦ and

either before a major tournament! Don’t ♠862 West, your partner, leads the ace of hearts.

just before a big event. It’s all far too ♣K ♥A-K-x-x, so dummy’s only real asset is

Card sequences. More and more people ♣AQ72 rather less lecturing would have made it a

these days are playing the Jacoby 2NT after great deal better.

On 18th November, Wimbledon Bridge Club held its annual charity pairs event. This traditionally consists of a duplicate session, with an auction,

raffle and stalls, to raise money for various charities. This year they were St Raphael's Hospice, Breast Cancer Hope, the Wimbledon Guild, and

Sri Lanka’s Village of Hope. One of the star attractions was the auctioning of several major bridge stars to play with club members at a ‘Bridge

with the Expert’ event which is scheduled for Wednesday evening, 6th February 2008. The club would like to take this opportunity for thanking

all those experts who agreed to take part, and also Maurice Cahm of Bridgemate pro UK and Eire for his generous sponsorship.