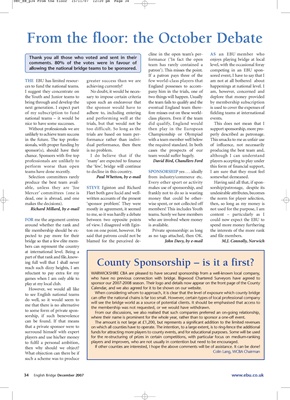 From the floor: the October Debate

comments. 80% of the votes were in favour of team has rarely contained a level, with the occasional foray

allowing the national bridge teams to be sponsored. patron’). This misses the point. competing in an EBU spon-

If a patron pays three of the sored event, I have to say that I

I suggest they concentrate on No doubt, it would be neces- pany him in the trials, one of am, however, concerned and

the Youth and Junior teams to sary to impose certain criteria two things will happen. Usually deplore that money provided

next generation. I expect part the sponsor would have to eventual England team there- is used to cover the expenses of

of my subscription to fund adhere to, including entering fore misses out on these world- fielding teams at international

national teams – it would be and performing well at the class players. Even if the team events.

nice to have some successes. trials, but that would not be did qualify, England would This does not mean that I

Without professionals we are too difficult. So long as the then play in the European support sponsorship, more pro-

unlikely to achieve team success trials are based on team per- Championship or Olympiad perly described as patronage.

in the future. The top profes- formance rather than indivi- with a team member well below This smacks to me as unfair use

sionals, with proper funding by dual performance, then there the required standard. In both of influence, not necessarily

sponsor(s), should have their is no problem. cases the prospects of our producing the best team and,

chance. Sponsors with five top I do believe that if the team would suffer hugely. although I can understand

professionals are unlikely to ‘many’ are expected to finance David Bird, Chandlers Ford players accepting to play under

perform worse than open the ‘few’, bridge will continue this form of financial support,

teams have done recently. to decline in this country. SPONSORSHIP yes . . . ideally I am sure that they must feel

produce the best team avail- Every other sport or activity Having said all that, if spon-

able, unless they are ‘Joe STEVE Eginton and Richard makes use of sponsorship, and sorship/patronage, despite its

Mercer’ committees (one is Fleet both gave lucid and well- frankly not to do so is wasting undesirable attributes, becomes

dead, one is abroad, and one written accounts of the present money that could be other- the norm for player selection,

makes the decisions). ‘sponsor problem’. They were wise spent, or not collected off then, so long as my money is

Richard Millard, by e-mail mostly in agreement, it seemed members! This includes Youth not used for the purpose, I am

to me, so it was hardly a debate teams. Surely we have members content – particularly as I

around whether the rank and of view. I disagreed with Egin- is available. spend more money furthering

file membership should be ex- ton on one point, however. He Private sponsorship: as long the interests of the more rank

pected to pay more for their said that patrons could not be as no tags attached, then OK. and file members.

bridge so that a few elite mem- blamed for the perceived de- John Davy, by e-mail M.J. Connolly, Norwich

bers can represent the country

at international level. Being a

part of that rank and file, know-

ing full well that I shall never

reach such dizzy heights, I am

County Sponsorship – is it a first?

reluctant to pay extra for my WARWICKSHIRE CBA are pleased to have secured sponsorship from a well-known local company,

games when I am only able to who have no previous connection with bridge. Bigwood Chartered Surveyors have agreed to

play at my local club. sponsor our 2007-2008 season. Their logo and details now appear on the front page of the County

However, we would all like Calendar, and we also agreed for it to be shown on our website.

to see English national teams When considering whom to approach, it is clear that the level of exposure which county bridge

can offer the national chains is far too small. However, certain types of local professional company

do well, so it would seem to

will see the bridge world as a source of potential clients. It should be emphasised that access to

me that there is no alternative

the membership was not requested, or we would have withdrawn.

to some form of private spon- From our discussions, we also realised that such companies preferred an on-going relationship,

sorship, if such benevolence where their name is prominent for the whole year, rather than to sponsor a one-off event.

can be found. If that means The amount is not large at £1,200, but represents a significant addition to the limited revenues

that a private sponsor were to on which all counties have to operate. The intention, to a large extent, is to ring-fence the additional

surround himself with expert funds for attracting more players to county events, and for educational purposes. Some will be used

players and use his/her money for the re-structuring of prizes in certain competitions, with particular focus on medium-ranking

to fulfil a personal ambition, players and improvers, who are not usually in contention but need to be encouraged.

then why should we object? If other counties are interested, I hope the above comments will be of assistance. It can be done!

What objection can there be if Colin Lang, WCBA Chairman

such a scheme was to produce