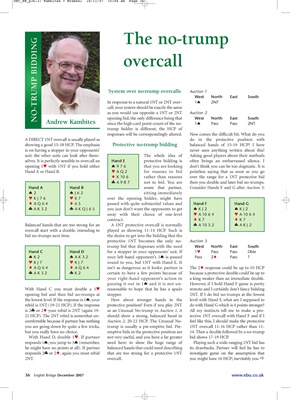 call, your system should be exactly the same

as you would use opposite a 1NT or 2NT Auction 2

opening bid, the only difference being that West North East South

trump bidder is different, the HCP of

responses will be correspondingly altered. Now comes the difficult bit. What do you

showing a good 15-18 HCP. The emphasis Protective no-trump bidding balanced hands of 15-19 HCP? I have

is on having a stopper in your opponents’ never seen anything written about this!

suit: the other suits can look after them- The whole idea of Asking good players about their methods

selves. It is perfectly sensible to overcall an Hand E protective bidding is often brings an embarrassed silence. I

opening 1♥ with 1NT if you hold either ♠976 that you are looking don’t think you can be too dogmatic. It is

Hand A or Hand B. ♥AQ2 for reasons to bid pointless saying that as soon as you go

♣A987 not to bid. You are then you double and later bid no-trumps.

Hand A Hand B aware that partner, Consider Hands F and G after Auction 3:

overcall start with a double, intending to played as showing 11-14 HCP. Such is

bid no-trumps next time. the desire to get into the bidding that the

protective 1NT becomes the only no- Auction 3

Hand C Hand D for a stopper in your opponents’ suit. If 1♥ Pass Pass Dble

your right-hand opponent’s action in a king weaker than an immediate double.

passing it out in 1 ♠ and it is not un- However, if I hold Hand F game is pretty

the lowest level. If the response is 1♠, your How about stronger hands in the level with Hand F, what am I supposed to

rebid is 1NT (19-21 HCP). If the response protective position? Even if you play 2NT do with Hand G which is 4 points stronger?

21 HCP). The 2NT rebid is somewhat un- should show a strong, balanced hand in tective 1NT overcall with Hand F and if I

comfortable because if partner has nothing Auction 2, 20-22 HCP. The Unusual No- feel like this, I should make the protective

you are going down by quite a few tricks, trump is usually a pre-emptive bid. Pre- 1NT overcall 11-16 HCP rather than 11-

but you really have no choice. emptive bids in the protective position are 14. Then a double followed by a no-trump

responds 1♠, you jump to 3♠ (remember, need here: to show the huge range of Playing such a wide-ranging 1NT bid has

he might have no points at all). If partner balanced hands that could need describing its drawbacks. Partner will feel he has to

responds 2♣ or 2♦, again you must rebid that are too strong for a protective 1NT investigate game on the assumption that