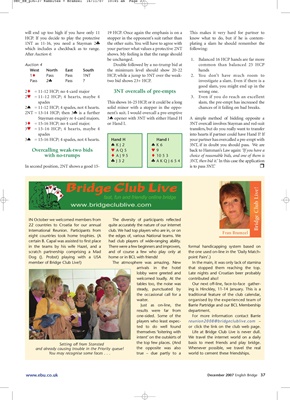 will end up too high if you have only 11 19 HCP. Once again the emphasis is on a This makes it very hard for partner to

HCP. If you decide to play the protective stopper in the opponent’s suit rather than know what to do, but if he is contem-

1NT as 11-16, you need a Stayman 2♣ the other suits. You will have to agree with plating a slam he should remember the

which includes a checkback as to range. your partner what values a protective 2NT following:

After Auction 4: shows. My feeling is that the range should

spades This shows 16-25 HCP, or it could be a long slam, the pre-empt has increased the

Stayman enquiry re 4-card majors. 3♠ opener with 3NT with either Hand H A simple method of bidding opposite a

spades into hearts if partner could have Hand I? If

Overcalling weak-two bids ♥AQ5 ♥ 9 back to Hamman’s Law again: ‘If you have a

IN October we welcomed members from The diversity of participants reflected

International Reunion. Participants from club. We had top players who are in, or on

eight countries took home trophies. (A the edges of, various National teams. We

certain B. Capal was assisted to first place had club players of wide-ranging ability.

in the teams by his wife Hazel, and a There were a few beginners and improvers, formal handicapping system based on

Dog (J. Probst) playing with a USA home or in BCL with friends! point Pairs’.)

member of Bridge Club Live!) The atmosphere was amazing. New In the main, it was only lack of stamina

arrivals in the hotel that stopped them reaching the top.

lobby were greeted and Late nights and Croatian beer probably

welcomed loudly. At the contributed also!

tables too, the noise was Our next off-line, face-to-face gather-

steady, punctuated by ing is Hinckley, 11-14 January. This is a

the occasional call for a traditional feature of the club calendar,

waiter. organised by the experienced team of

Just as on-line, the Barrie Partridge and our BCL Membership

results were far from department.

one-sided. Some of the For more information contact Barrie

ted to do well found or click the link on the club web page.

themselves ‘loitering with Life at Bridge Club Live is never dull.

Setting off from Stansted the top few places. (And basis to meet friends and play bridge.

and already causing trouble in the Priority queue! the opposite was also Whenever possible, we travel the real

You may recognise some faces . . . true – due partly to a world to cement these friendships.