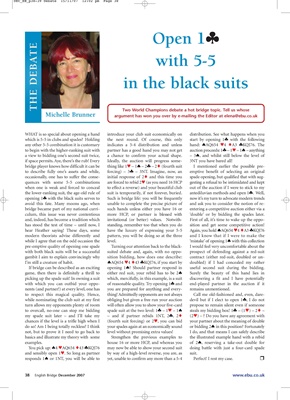 in the black suits

Michelle Brunner argument has won you over by e-mailing the Editor at elena@ebu.co.uk

WHAT is so special about opening a hand introduce your club suit economically on distribution. See what happens when you

which is 5-5 in clubs and spades? Holding the next round. Of course, this only start by opening 1♣ with the following

to begin with the higher-ranking suit with partner has a good hand you may not get auction proceeds: 1♣ – 1♥ – 1♠ – anything

a view to bidding one’s second suit twice, a chance to confirm your actual shape. – 3♠, and whilst still below the level of

if space permits. Aye, there’s the rub! Every Ideally, the auction will progress some- 3NT you have bared all!

to describe fully one’s assets and while, forcing) – 3♣ – 3NT. Imagine, now, an emptive benefit of selecting an original

occasionally, one has to suffer the conse- initial response of 2♦ and this time you spade opening, but qualified that with sug-

the lower-ranking suit, the age-old rule of suit is temporarily, if not forever, buried. antediluvian methods and open 1♣. Well,

opening 1♣ with the black suits serves to Such is bridge life: you will be frequently now it’s my turn to advocate modern trends

avoid this fate. Many moons ago, when unable to complete the precise picture of and ask you to consider the notion of re-

culum, this issue was never contentious more HCP, or partner is blessed with ‘double’ or by bidding the spades later.

and, indeed, has become a tradition which invitational (or better) values. Notwith- First of all, it’s time to wake up the oppo-

has stood the test of time – until now, I standing, remember too that when you do sition and get some competitive action!

modern theorists advise differently and pattern, you will be doing so at the three and I know that if I were to make the

while I agree that on the odd occasion the level. ‘mistake’ of opening 1♠ with this collection

with both black suits will be a successful suited debate and, again, with no oppo- prospect of defending against a red-suit

gambit I aim to explain convincingly why sition bidding, how does one describe: contract (either red-suit, doubled or un-

If bridge can be described as an exciting opening 1♠? Should partner respond in useful second suit during the bidding.

game, then there is definitely a thrill to either red suit, your rebid has to be 2♠ Surely the beauty of this hand lies in

picking up the spade suit! In owning a suit which, mercifully, in this example, is a suit discovering a fit and I have potentially

with which you can outbid your oppo- of reasonable quality. Try opening 1♣ and end-played partner in the auction if it

nents (and partner!) at every level, one has you are prepared for anything and every- remains unmentioned.

to respect this magical quality. Hence, thing! Admittedly opponents are not always Call me old-fashioned and, even, dare-

while nominating the club suit at my first obliging but given a free run your auction devil but if I elect to open 1♣, I do not

chances if the level is a trifle high when I (fourth suit forcing) or 2♥, you can bid your partner about the meaning of double

do so! Am I being totally reckless? I think your spades again at an economically sound or bidding 2♠ in this position? Fortunately

not, but to prove it I need to go back to level without promising extra values! I do, and that means I can safely describe

examples. house 16 or more HCP, and whereas you of 2♠, reserving a take-out double for

and sensibly open 1♥. So long as partner by way of a high-level reverse, you are, as suit.

responds 1♠ or 1NT, you will be able to yet, unable to confirm any more than a 5-4 Perfect! I rest my case.