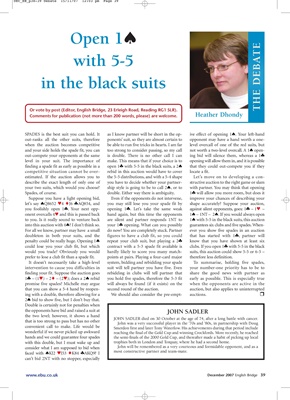 in the black suits

Comments for publication (not more than 200 words, please) are welcome. Heather Dhondy

SPADES is the best suit you can hold. It as I know partner will be short in the op- ive effect of opening 1♠. Your left-hand

out-ranks all the other suits, therefore ponents’ suit, so they are almost certain to opponent may have a hand worth a one-

when the auction becomes competitive be able to run five tricks in hearts. I am far level overcall of one of the red suits, but

and your side holds the spade fit, you can too strong to consider passing, so my call not worth a two-level overcall. A 1♠ open-

out-compete your opponents at the same is double. There is no other call I can ing bid will silence them, whereas a 1♣

level in your suit. The importance of make. This means that if your choice is to opening will allow them in, and it is possible

finding a spade fit as early as possible in a open 1♣ with 5-5 in the black suits, a 2♠ that they could out-compete you if they

competitive situation cannot be over- rebid in this auction would have to cover locate a fit.

estimated. If the auction allows you to the 5-5 distributions, and with a 5-4 shape Let’s move on to developing a con-

your two suits, which would you choose? ship style is going to be to call 2♠, or to with partner. You may think that opening

Spades, of course. double. Either way there is ambiguity. 1♣ will allow you more room, but does it

Suppose you have a light opening bid, Even if the opponents do not intervene, improve your chances of describing your

onent overcalls 4♥ and this is passed back hand again, but this time the opponents 1♠ – 1NT – 2♠. If you would always open

to you. Is it really sound to venture back are silent and partner responds 1NT to 1♠ with 5-5 in the black suits, this auction

into this auction with 4♠? I don’t think so. your 1♣ opening. What can you possibly guarantees six clubs and five spades. When-

For all we know, partner may have a small do now? You are completely stuck. Partner ever you show five spades in an auction

doubleton in both your suits, and the figures to have a club fit, so you could that has started with 1♣, partner will

penalty could be really huge. Opening 1♠ repeat your club suit, but playing a 2♣ know that you have shown at least six

could lose you your club fit, but which contract with a 5-3 spade fit available is clubs. If you open 1♣ with 5-5 in the black

would you trade? Obviously you would hardly likely to score you many match- suits, this auction could show 5-5 or 6-5 –

prefer to lose a club fit than a spade fit. points at pairs. Playing a four-card major therefore less definition.

intervention to cause you difficulties in suit will tell partner you have five. Even your number-one priority has to be to

finding your fit. Suppose the auction goes rebidding in clubs will tell partner that share the good news with partner as

promise five spades? Michelle may argue will always be found (if it exists) on the when the opponents are active in the

that you can show a 5-4 hand by reopen- second round of the auction. auction, but also applies to uninterrupted

ing with a double, therefore allowing for a We should also consider the pre-empt- auctions.

Double is certainly not for penalties when

the opponents have bid and raised a suit at JOHN SADLER

the two level; however, it shows a hand

JOHN SADLER died on 30 October at the age of 74, after a long battle with cancer.

that is too strong to pass but has no other John was a very successful player in the ’70s and ’80s, in partnership with Doug

convenient call to make. Life would be Smerdon first and later Tony Waterlow. His achievements during that period include

wonderful if we never picked up awkward reaching the final of the Gold Cup and winning Crockfords. More recently, he reached

hands and we could guarantee four spades the semi-finals of the 2000 Gold Cup, and thereafter made a habit of picking up local

with this double, but I must wake up and trophies both in London and Torquay, where he had a second home.

consider what I am supposed to bid when John will be remembered as a very courteous and formidable opponent, and as a