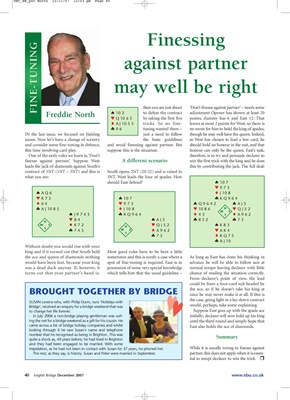 may well be right

♠ to defeat the contract adjustment Opener has shown at least 20

♣ 96 tuning wanted there – no room for him to hold the king of spades,

IN the last issue, we focused on bidding just a need to follow though he may well have the queen. Indeed,

issues. Now let’s have a change of scenery the basic guidelines as West has chosen to lead a low card, he

and consider some fine-tuning in defence, and avoid finessing against partner. But should hold an honour in the suit, and that

this time involving card play. suppose this is the situation. honour can only be the queen. East’s task,

One of the early rules we learn is, ‘Don’t therefore, is to try and persuade declarer to

finesse against partner.’ Suppose West A different scenario win the first trick with the king and he does

leads the jack of diamonds against South’s this by contributing the jack. The full deal:

what you see: 3NT. West leads the four of spades. How

Without doubt you would rise with your

would have been lost, because your king spot of fine-tuning is required. East is in advance he will be able to follow suit at

was a dead duck anyway. If, however, it possession of some very special knowledge normal tempo leaving declarer with little

turns out that your partner’s hand is: which tells him that the usual guideline – chance of reading the situation correctly.

From declarer’s point of view, the lead

could be from a four-card suit headed by

the ace, so if he doesn’t take his king at

BROUGHT TOGETHER BY BRIDGE once he may never make it at all. If this is

SUSAN Levene who, with Philip Dunn, runs ‘Holidays with

Bridge’, received an enquiry for a bridge weekend that was

to change her life forever.

In July 2006 a non-bridge playing gentleman was surf-

ing the net for a bridge weekend as a gift for his cousin. He

the case, going light in a lay-down contract

would, perhaps, take some explaining.

Suppose East goes up with the spade ace

initially; declarer will now hold up his king

until the third round and simply hope that

came across a list of bridge holiday companies and whilst East also holds the ace of diamonds.

looking through it he saw Susan's name and telephone

number that he recognised as being in Brighton. This was

quite a shock as, 40 years before, he had lived in Brighton

and they had been engaged to be married. With some

trepidation, as he had not been in contact with Susan for 37 years, he phoned her. While it is usually wrong to finesse against

The rest, as they say, is history. Susan and Peter were married in September. partner, this does not apply when it is essen-

tial to tempt declarer to win the trick.