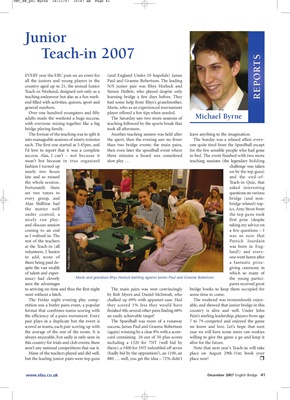 all the juniors and young players in the Paul and Graeme Robertson. The leading

country aged up to 21, the annual Junior N/S junior pair was Rhys Horlock and

Teach-in Weekend, designed not only as a Simon Hollett, who played despite only

teaching endeavour but also as a fun week- learning bridge a few days before. They

end filled with activities, quizzes, sport and had some help from Rhys’s grandmother,

general mayhem. Marie, who as an experienced tournament

Over one hundred youngsters and fifty player offered a few tips when needed.

adults made the weekend a huge success, The Saturday saw two more sessions of Michael Byrne

The format of the teaching was to split it Another teaching session was held after leave anything to the imagination.

into manageable sessions of ninety minutes the sport, then the evening saw no fewer The Sunday was a relaxed affair, every-

each. The first one started at 5.45pm, and than two bridge events: the main pairs, one quite tired from the Speedball except

success. Alas, I can’t – not because it three minutes a board was considered to bed. The event finished with two more

wasn’t but because in true organised slow play . . . teaching sessions (the legendary bidding

fashion I turned up challenge was taken

nearly two hours on by the top guns)

late and so missed and the end-of-

the whole session. Teach-in Quiz, that

are two tutors to questions on various

every group, and bridge (and non-

under control, a the top guns took

and-discuss session taking my advice on

coming to an end a few questions – I

as I waltzed in. The was so sure that

rest of the teachers Patrick Jourdain

at the Teach-in (all was born in Eng-

volunteers, I hasten land!) and every-

to add, none of one went home after

them being paid de- a fantastic prize-

of talent and exper- which so many of

went without a hitch. by Rob Myers and Daniel McIntosh, who some time to come.

The Friday night evening play comp- chalked up 69% with apparent ease. Had The weekend was tremendously enjoy-

etition was a butler pairs event, a popular they scored 1% less they would have able, and showed that junior bridge in this

format that combines teams scoring with finished 4th, several other pairs finding 68% country is alive and well. Under John

the efficiency of a pairs movement. Every an easily achievable target! Pain’s sterling leadership, players from age

scored as teams, each pair scoring up with success, James Paul and Graeme Robertson we know and love. Let’s hope that next

the average of the rest of the room. It is (again) winning by a clear 8% with a score- year we will have some more raw rookies

always enjoyable, but sadly is only seen in card containing 26 out of 30 plus scores willing to give the game a go and keep it

this country for trials and club events; there including a 1520 for 7NT (well bid by alive for the future.

aren’t any national competitions that use it. them), a 3400 for 3NT redoubled off seven Note that next year’s Teach-in will take