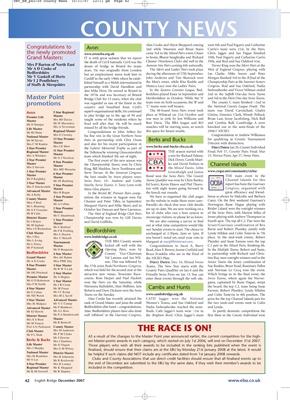 Congratulations to Avon 2nd while Maureen and Brian Stairs Curtis’s team were 21st. In the Pairs,

Grand Masters: IT is with great sadness that we report to home, Bharat Sanghrajka and Richard 10th, Paul Fegarty and Catherine Curtis

the death of Cyril Samuels. Cyril was the Chester (Wardown Club) did well in the 39th, and Rod and Sue Oakford 41st.

Mr A D Cooke of years. He was originally from London The Men’s and Ladies’ Pairs took place West of England Congress, playing with

Bedfordshire but an employment move took him to during the afternoon of 27th September. Ian Clarke. Mike Seaver and Peter

Mr I J Pendlebury lished himself as a Welsh international in the Men’s event, while Rita Keable and Championship Pairs at the Summer Seniors

also Mike Hirst. He moved to Bristol in In the Eastern Counties League, Bed- Stelmashenko and Victor Milman ended

Master Point Bridge Club for 15 years, when the club Hertfordshire in October. While the ‘A’ and 3rd in the Herts One-day Swiss Teams.

team won on both occasions, the ‘B’ and The county C team finished =2nd in

promotions was regarded as one of the finest in the

country and benefited from Cyril’s ‘C’ teams were well beaten. the National County League Finals. The

Master to play bridge up to the age of 90 and place at Wilstead on 21st October and Gittins, Dominic Clark, Wendy Pollard,

Master Mrs MJ Davies taught some of the residents where he

Mr D Hamper Mr IF Macartney lived well after that. He will be much Ron Davis. The BBA league and KO and Cynthia Bull. Cambridge A were

Mrs A Teversham missed by all his bridge friends. matches will be starting soon, so watch knocked out in the semi-finals of the

Mrs C M Rankin and also for his recent participation in Director with distinction.

2 Star Premier the Lederer Memorial Trophy as part of

Master the best results by Avon players were: Bond won the Swiss Pairs. The County THE main event in the

Mrs B Regan In the Bristol BC Premier Pairs comp- the knock-out rounds.

County Master Master Chanter and Peter Tilley, in September on the website to make them more user- Carey. On the first weekend Guernsey’s

Mr L Blanning Margaret Harris and Mike Short, and in friendly; do check that your club details Norwegian Rune Hague playing with

2 Star Premier October Ian Duncan and Steve Lawrence. are up-to-date. We are now working on a Reider Laland were the outright winners

Master list of clubs who run a host system to of the Swiss Pairs, with Marion Miles of

1 Star Premier We are also running a survey to find fourth spot. The top all C.I. Pair were the

Miss J E Richardson our Sunday events to start. The choice is: Bavin and Robert Plumley, jointly with

Mrs J Hoy Mrs U Henzell www.bedsbridge.co.uk you haven’t voted yet, send your vote to place. In the mid-week events, Robert

Ms L Priess kicked off well with the

Master Mr R W S Lark which was held for the second year at the County Pairs Qualifier on Jan 6 and the and Norman Le Cocq won the event.

Mr DG Pritchard 2 Star Master attractive new venue, Towcester Race- Friendly Swiss Pairs on Jan 13. You can Which brings us to the final event, the

enter these events through the web site.

won the Pairs on the Saturday, while gians, captained by Rune Hague, swept

Marianna Kultalahti, Alan Shillitoe, Iain Cambs and Hunts the board, the top C.I. team being Susie

THE RACE IS ON!

Mr J Downie AS a result of the changes to the Master Point year announced earlier, the current competition for the high-

Berks & Bucks Mrs I Stanbury est Master-points awards in each category, which started on July 1st 2006, will end on December 31st 2007.

Mrs J Murphy Mrs E M Wilsey finalised, should ensure that their claims are at the EBU by Monday 21st January 2008 at the latest. It would

be helpful if such claims did NOT include any certificates dated from 1st January 2008 onwards.

4 Star Premier Mrs R Lenney the end of December are submitted to the EBU by the same date, if they wish their member’s awards to be