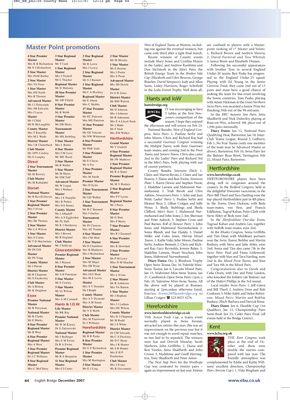 West of England Teams at Weston, includ- are confined to players with a Master-

Master Point promotions ing one against the eventual winners, but point ranking of 1* Master and below:

came only third after a tight final match. 1. Richard Brown and Andrew Morris;

Cup (Elizabeth and Glen Bourne, George sed to the England Under-25 squad.

1 Star Master Mr D Maloney Master Master in the Leslie Everett Trophy. Well done all. pairs and must have a good chance of

with Adam Hickman in the Great Northern

Club Master Swiss Pairs, was awarded a Junior Prize for

Mrs JM Edwards Master 17 Star Premier Mr D Johnson IT was encouraging to have finishing 30th out of the 98 entrants.

Ross-on-Wye, achieved 4th place out of

11 Star Premier Ms J Mabe the afternoon and will return on Feb 24.

Mr V Gaskell the Multiple Teams, with their Guernsey of the team may be Advanced Master or

4 Star Premier team-mates, and coming 2nd in the Pivot above), Bartestree; Feb 10, Swiss Pairs for

1 Star Premier in the Men’s Pairs, both playing with out

2. Madeline Lawson and Mahmood Nur- country. In the Bedford Congress, held at

Jones and Mahmood Nurmohamed; 2. with Suffolk team-mates, were 2nd.

Serby, Andrew Bennett; 2. Chris and Rich- Rodney, with Steve and Julie Abley, were

Jones, Mahmood Nurmohamed. together with Stan and Tara Harding, were

Club Master Mr F Cawley Master Feb. 10, Valentine Mini-Swiss Teams. All of the Hubert Phillips in the 3rd round.

the above will be played at Romsey, Local results: Swiss Pairs: 1. Jeff Green

Crowe; 3. Madeleine and Geoff Harring- pared with last year. The