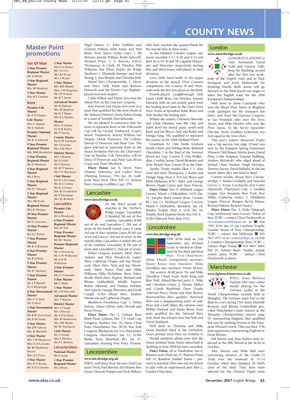 Nigel Osmer; 2= John Griffiths and who have reached the quarter-finals for

In the Midland Counties League, our

Mrs RM Blundy competition, but County B and West- finishing fourth. Both teams will go

Kent Advanced Master Mixed Pairs at the Guernsey Congress. Edwards with an out-county guest were Well done to Anne Catchpole who

Mrs M Hepburn team that qualified for the semi-finals of Swiss Teams at Spondon; Katie Bruce and

Master (with apologies for the omission last

Life Master to a team of Scottish Internationals. Within the county, Christina Brewster to Jan Svendsen who won the Swiss

Master We are pleased to announce that the

Mrs C Ingham and Chris Heames won the Otto and Teams, and Mike Fletcher who won the

Dennis O`Donovan and Peter Law. The Grantham A1 (Jim Steele, Graham was a big success (see page 25)and was

Lancashire IN the third round of Richard Palmer, Richard Davey).

Master A finished 5th out of five four, YCBC – contact Chris Duckworth at

Regional Master out of six and Lancashire C 5th out of

5 Star Premier 3rd out of four counties, Lancs B 3rd out

Regional Master of six and Lancs C 3rd out of seven. In the

Premier Regional of six counties, Lancashire B 5th out of

Master seven and Lancashire C 2nd out of seven.

Sutton, Glenn Oliver, Julia Newall and three and a half tables, the winners were Brunner and Rhona Goldenfield pro-

Diary Dates, all at Dunholme: Jan 6, Alex Morris and Mike Bell were

Mr D G Lowndes Mr I Bruce team (Nick, Paul Bowyer, Jim Mason, Ben to play with an experienced pair; Mar 2, clear of the field. They have been