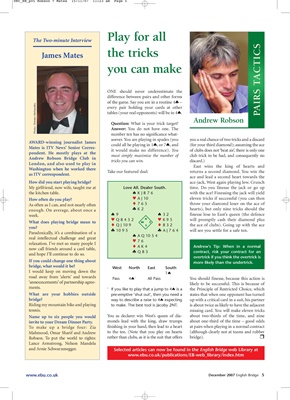 The Two-minute Interview Play for all

ONE should never underestimate the

difference between pairs and other forms

every pair holding your cards at other

tables (your real opponents) will be in 4♠.

Question: What is your trick target?

Answer: You do not have one. The

number ten has no significance what-

soever. You are playing in spades (you you a real chance of two tricks and a discard

could all be playing in 1♠, or 7♠, and (for your third diamond); assuming the ace

it would make no difference). You of clubs does not ‘beat air’, there is only one

pondent. He mostly plays at the

must simply maximise the number of club trick to be had, and consequently no

tricks you can win. discard.)

London, and also used to play in

East wins the king of hearts and

Washington when he worked there

Take our featured deal: returns a second diamond. You win the

ace and lead a second heart towards the

My girlfriend, now wife, taught me at Love All. Dealer South. time. Do you finesse the jack or go up

the kitchen table. ♠KJ876 with the ace? Finessing the jack will yield

How often do you play? ♥ A J 10 eleven tricks if successful (you can then

As often as I can, and not nearly often ♦765 throw your diamond loser on the ace of

enough. On average, about once a ♣K2 hearts), but only nine tricks should the

What does playing bridge mean to W E

Paradoxically, it’s a combination of a

relaxation. I’ve met so many people I

♦AK4 Andrew’s Tip: When in a normal

♣Q83 contract, risk your contract for an

and hope I’ll continue to do so.

If you could change one thing about more likely than the undertrick.

bridge, what would it be? West North East South

I would keep on moving down the 1♠

road away from ‘alerts’ and towards Pass 4♠1 All Pass You should finesse, because this action is

‘announcements’ of partnership agree- likely to be successful. This is because of

If you like to play that a jump to 4♠ is a the Principle of Restricted Choice, which

What are your hobbies outside pre-emptive ‘shut out’, then you need a states that when one opponent has turned

bridge? way to describe a raise to 4♠ expecting up with a critical card in a suit, his partner

Riding my mountain bike and playing to make. The best tool is Jacoby 2NT. is about twice as likely to have the adjacent

Name up to six people you would You as declarer win West’s queen of dia- about two-thirds of the time, and nine

invite to your Dream Dinner Party. monds lead with the king, draw trumps about one-third of the time – good odds

To make up a bridge four: Zia finishing in your hand, then lead to a heart at pairs when playing in a normal contract

Mahmood, Omar Sharif and Andrew to the ten. (Note that you play on hearts (although clearly not at teams and rubber

Robson. To put the world to rights: rather than clubs, as it is the suit that offers bridge).

and Arnie Schwarzenegger. Selected articles can now be found in the English Bridge web Library at