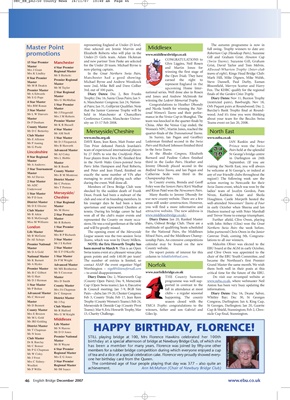 representing England at Under-25 level. The autumn programme is now in

promotions Elizabeth Roberts who will play in the

Master for the Under 20 team. Michael Byrne is Grist, David Taylor and Tom Melvin.

4 Star Premier and Martin Jones for

Manchester had a good showing: the Open Trials. They have Mark Hill, Mike Dignen, Mike Walsh,

Premier Regional earned the right to

Master represent England in the

Premier Master 3rd, out of 100 pairs. Fox. The KHBC qualify for the regional

Master and Nicola Smith for winning the Nat-

Mr L W Danvers held in Manchester at Chancellors wood. And it’s time you were thinking

Mrs J M Roberts mance in the Venice Cup in Shanghai. The

Master Conference Centre, Manchester Univer- about your team for the Beccles Swiss

Mr K B Hassell China. After the Venice Cup ended, the

Advanced Master team of experienced international players in the Swiss Teams. Pairs held at the splendid

Lincolnshire At the Rhodes Congress, Elizabeth

Master in the North Wales Green-pointed Swiss third in the Ladies Pairs. Heather and September. (If you are

Mr A Andrews Jeremy Dhondy placed second in the

3 Star Tournament and Peter and Jean Hand, finished on Bedford Swiss Teams, and Ian Pagan and be welcome at St George’s, or indeed at

Master Catherine Seale were third in the

District Master managing to avoid playing each other region!) The following week saw the

2 Star Master during the event. Well done all. In County events, Brenda and Geoff action moving to Newcastle for their

Mrs T Porteus Members of Deva Bridge Club were Swiss Teams event, which was won by the

shocked by the sudden death of Frank ladies’ team of Jocelyn Gordon, Pam

1 Star Master Merseyside/ Many thanks to Jeremy Dhondy for

Dean. Frank had been a stalwart of the Niven, Kathleen Adair and Sheila

Mr P D Ison Cheshire club and one of its founding members. In our new county website. There are a few Houghton. Castle Morpeth hosted the

District Master 1 Star Regional his younger days he had been a keen areas still under construction. However, well-attended Newcomers’ Teams of Four

Club Master Ms M Howe tennis. During his bridge career he had attractive website. The new address is Hudson teamed up with Peter Marshall

Mr B Atkin 2 Star Premier won all of the club’s major events and www.middlesexbridge.co.uk/. and Trevor Stone to emerge triumphant.

sions. He was a real gentleman at the table with John Atthey (Glos) won the Great

London 1 Star Premier and will be greatly missed. multitude of qualifying heats scheduled Northern Swiss Pairs the week before.

Life Master Master The opening event of the Merseyside for the National Pairs, the Middlesex John partnered Chris Owen in the Junior

Dr AE Scheps 3 Star Master Teams, which was won by Dusty Millers. ionship Pairs. An extensive competitions lations to all our winners.

Premier National Mr J S Kellett NOTE: the Eric Howarth Trophy has calendar may be found on the new Malcolm Oliver was elected to the

Master 2 Star Master been moved to March 9. This is an Open County website. EBU board at the AGM in early October,

National Master 1 Star Master green points and only £40.00 per team! column to hsbakhshi@aol.com. chair of the EBU Youth Committee, and

Premier Master Mr MS Brotherton Worthington – nigel@tilstonefernall.com them both well in their posts at this

Ms B C Gilbert Mr S Corcoran – to avoid disappointment. www.norfolkbridge.co.uk critical time for the future of the EBU.

Master birthday at a special afternoon of bridge at Newbury Bridge Club, of which she

Mr C Bonser has been a member for many years. Florence was joined by fifty-one other

of tea and a slice of a special celebration cake. Florence very proudly showed every-

one her birthday card from the Queen.