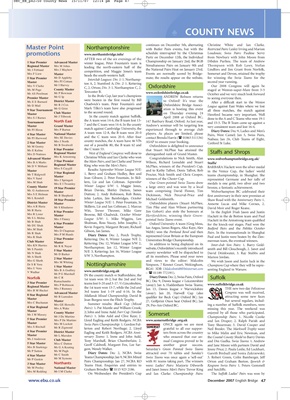 Master Point Northamptonshire with Butler Pairs events, but with the Restricted Pairs: Lesley Irving and Marion

Party on December 12th, the Individual

from Newbury with John Moore from

AFTER two of the six evenings of the

leading the north-eastern half of the

heads the south-western half.

5 Star Premier Mr D Appleby mate; the results appear on the website. for winning the Swiss Teams for the

staged at Weston-super-Mare from 3-5

Mr AS Perelman Mr P Bowman Towcester B. www.oxfordshirebridge.co.uk October and we very much look forward

Premier Master to seeing everyone then.

Ms E E Barnard District Master were beaten in the first round by Bill to Oxford! It’s true: the After a difficult start to the Weston

9 Star Tournament all three matches, the match against

Mrs S J Barnes Mr J Tilbrook In the county match against Suffolk, April 2008 at Oxford BC, done to the A and C Teams who won 19-1

Master Grand Master 7 and the C team won 14-6. In the county Andrew’s seminar will be targeting less very consistent team and lost 16-4.

Mr M Gentry Mr B Swalwell out of a possible 80, the B team 62 and Oxfordshire is delighted to announce

Mrs B A Marks 3 Star Premier the Main Pairs, and Ian Clarke and Trevor Wilson, Richard Lonsdale and Stuart

Master and to Kathy Talbot, Denis Talbot, Rob in the Venice Cup, the ladies’ world

Mrs V Sand winners of the Chester Cup. represented Germany and her tally of

County Master Winter League S/W: 1. Maggie Jones, a large entry and was won by a local bronze, a fantastic achievement.

Diary Dates: Dec 2, Porch Trophy, represented Great Britain at the European Paul and Justin were beaten by the Zim-

county newsletter will be dispatched to David Drinkwater, 3. Ray Stubbs and

Mrs M Whiting and views to the editor: Malcolm We wish Jason and Justin luck in the

Mrs B A Godfrey www.nottsbridge.org.uk

Mr P G Marshall IN the county match vs Staffordshire, the

Mrs GE Howells 29, Pro-Am Oxford BC. ing a number of Suffolk members, were

County Master enjoyed by all those who participated.

4 Star Premier District Master Eagling and Keith Rodgers. NCBA Anni- ters from across the country to Mike Malin and Eric Newman, and

Master Mr L Marsden versary Teams: 1. Irene and John Auld, who ensured that our an- the Coastal County Shield to Barry Davies

On Wednesdays the President’s Cup and Ian Clarke: Championship Pairs: The Suffolk Ladies’ Pairs was won by