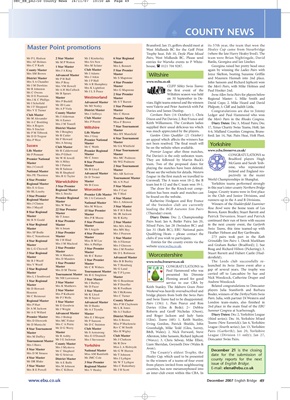 Bransford. Jan 15, golfers should meet at its 57th year, the team that won the

not been resolved. The final result will Yorkshire

Pat Davies’s is the only unbeaten team.

They are followed by Martin Buck’s

playing the matches have been deleted.

Mr BL Loasby etition has been made and matches can League. County teams were in first place

3 Star Premier be found on the website. in the Club and Junior Divisions, and

Regional Master Katherine Hodgson and Roy France runners-up in the A and B Divisions.

6 Star Regional Master Master Mrs MA Allen Mixed Pairs. Jan 28 (Swindon BC) and in the next county event, the Garforth

1 Star Master clubs if you wish to participate.

Mr A Fileman Entries for the county events via the

Mr B J Woolf Mrs B B Burley www.wcba.freeserve.co.uk The Leeds club successfully re-

Master carried off to Lancashire by Sue and

3 Star Master Mr J Burbey service to our CBA by

Regional Master County Master and Swiss Teams had to be disappointed.

Healey Cup, which used to be presented date for the submission of

from players invited from neighbouring issue of English Bridge.

an inter-club event within this CBA. In