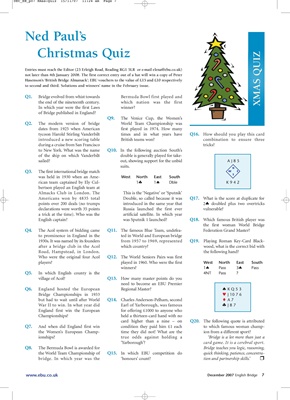 not later than 4th January 2008. The first correct entry out of a hat will win a copy of Peter

Hasenson’s ‘British Bridge Almanack’; EBU vouchers to the value of £15 and £10 respectively

to second and third. Solutions and winners’ name in the February issue.

the end of the nineteenth century. which nation was the first

In which year were the first Laws winner?

of Bridge published in England?

Q9. The Venice Cup, the Women’s

Q2. The modern version of bridge World Team Championship was

tycoon Harold Stirling Vanderbilt times and in what years have Q16. How should you play this card

during a cruise from San Francisco tricks?

to New York. What was the name Q10. In the following auction South’s

sailed? out, showing support for the unbid AJ85

was held in 1930 when an Ame- West North East South

bertson played an English team at

Almacks Club in London. The This is the ‘Negative’ or ‘Sputnik’

Americans won by 4835 total Double, so called because it was Q17. What is the score at duplicate for

declarations were worth 35 points Russia launched the first ever vulnerable?

a trick at the time). Who was the artificial satellite. In which year

after a bridge club in the Acol which country? wood, what is the correct bid with

Who were the original four Acol Q12. The World Seniors Pairs was first

players? played in 1960. Who were the first West North East South

Q5. In which English county is the 4NT Pass ?

village of Acol? Q13. How many master points do you

need to become an EBU Premier

but had to wait until after World Q14. Charles Anderson-Pelham, second ♦ A7

War II to win. In what year did Earl of Yarborough, was famous ♣ J87

England first win the European for offering £1000 to anyone who

Championships? held a thirteen-card hand with no

card higher than a nine – on Q20. The following quote is attributed

Q7. And when did England first win condition they paid him £1 each to which famous woman champ-

the Women’s European Champ- time they did not! What are the ion from a different sport?

ionships? true odds against holding a ‘Bridge is a lot more than just a

‘Yarborough’? card game. It is a cerebral sport.

Q8. The Bermuda Bowl is awarded for Bridge teaches you logic, reasoning,

the World Team Championship of Q15. In which EBU competition do quick thinking, patience, concentra-

bridge. In which year was the ‘honours’ count? tion and partnership skills.’