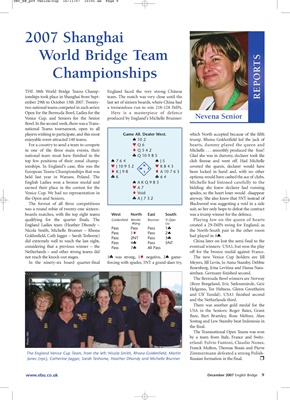 ionships took place in Shanghai from Sept- team. The match was very close until the

two national teams competed in each series: a tremendous run to win 218-128 IMPs.

Open for the Bermuda Bowl, Ladies for the Here is a masterpiece of defence

Bowl. In the second week, there was a Trans-

national Teams tournament, open to all

players wishing to participate, and this most Game All. Dealer West. which North accepted because of the fifth

For a country to send a team to compete ♥Q6 hearts, dummy played the queen and

in one of the three main events, their ♦Q542 Michelle . . . smoothly produced the four!

national team must have finished in the ♣ Q 10 9 8 5 Glad she was in dummy, declarer took the

top few positions of their zonal champ- ♠ 764 ♠J5 club finesse and went off. Had Michelle

held last year in Warsaw, Poland. The ♣ K ♣64 options, would have cashed the ace of clubs.

earned their place in the contest for the ♥A7 bidding: she knew declarer had running

Venice Cup. We had no representation in ♦ Void spades, so the heart loser would disappear

the Open and Seniors. ♣AJ732 anyway. She also knew that 5NT instead of

was a round robin of twenty-one sixteen- suit, so her only hope to defeat the contract

boards matches, with the top eight teams West North East South was a trump winner for the defence.

qualifying for the quarter finals. The Goldenfield Wenfei Brunner Yi Qian Playing low on the queen of hearts

Nicola Smith, Michelle Brunner – Rhona the North-South pair in the other room

did extremely well to reach the last eight, Pass 4♣ Pass 5NT China later on lost the semi final to the

considering that a previous winner – the Pass 7♣ All Pass eventual winners- USA1, but won the play

Netherlands – and other strong teams did off for the bronze medal against France.

not reach the knock-out stages. 1♣ was strong, 1♦ negative, 2♠ game- The new Venice Cup holders are Jill

The Bermuda Bowl winners are Norway

and the Netherlands third.

There was another gold medal for the

The Transnational Open Teams was won

by a team from Italy, France and Switz-