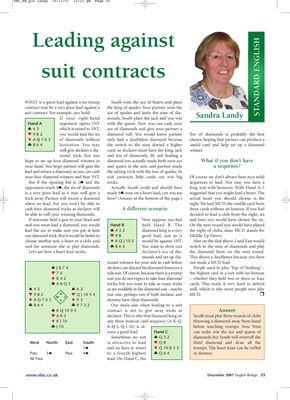 contract may be a very poor lead against a the king of spades. Your partner wins the

suit contract. For example, you hold: ace of spades and leads the nine of dia-

If your right-hand monds, South plays the jack and you win Sandra Landy

Hand A opponent opens 1NT with the queen. Now you can cash your

♠43 which is raised to 3NT, ace of diamonds and give your partner a

♥982 you would lead the six diamond ruff. You would know partner five of diamonds is probably the best

♦AQ765 of diamonds without only had a doubleton diamond because chance, hoping that partner can produce a

♣864 hesitation. You may the switch to the nine denied a higher useful card and help set up a diamond

well give declarer a dia- card, so declarer must have the king, jack winner.

mond trick, but you and ten of diamonds. By not leading a

your hand. You hope partner will gain the and queen in the suit, and partner made a sequence?

lead and return a diamond, so you can cash the setting trick with the two of spades. In

But if the opening bid is 1♠ and the tricks. sequences to lead. Nor may you have a

opponents reach 4♠, the six of diamonds Actually South could and should have long suit with honours. With Hand A, I

is a very poor lead as it may well give a made 4♠ even on a heart lead; can you see suggested that you might lead a heart. The

trick away. Partner will return a diamond how? (Answer at the bottom of the page.) actual heart you should choose is the

when on lead, but you won’t be able to eight. We lead MUD, the middle card from

cash four diamond tricks as declarer will A different scenario three cards without an honour. If you had

be able to ruff your winning diamonds. decided to lead a club from the eight, six

If someone held a gun to your head and Now suppose you had and four, you would have chosen the six.

said you must lead a diamond, you would Hand B held Hand B. The On the next round you would have played

lead the ace to make sure you got at least ♠432 diamond king is a very the eight of clubs, since MUD stands for

one diamond trick. But it would be better to ♥98 good lead, just as it Middle Up Down.

choose another suit, a heart or a club, and ♦ K Q J 10 5 would be against 3NT. Also on the deal above, I said East would

wait for someone else to play diamonds. ♣864 You want to drive out switch to the nine of diamonds and play

Let’s see how a heart lead works. declarer’s ace of dia- the diamond three on the next round.

mond winners for your side to cash before not made a MUD lead.

♥ 76 side suit. Of course, because there is a trump the highest card in a suit with no honour

♣ AKQ5 tricks, but you want to take as many tricks cards. This made it very hard to defend

♠ 43 ♠ A2 as are available in the diamond suit – maybe well, which is why most people now play

♥ AK3 declarer. This is why that diamond king, or South must play three rounds of clubs

ways a good lead. Hand C can make win the ace and queen of

Sometimes no suit ♠Q32 diamonds but South will overruff the

All Pass lead. On Hand C, the