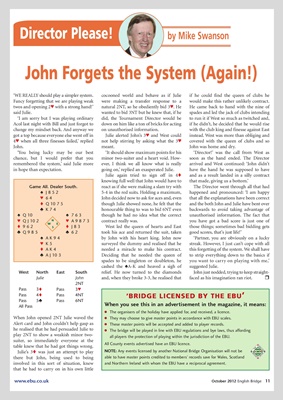 ‘WE REALLY should play a simpler system. cocooned world and behave as if Julie if he could find the queen of clubs he

Fancy forgetting that we are playing weak were making a transfer response to a would make this rather unlikely contract.

twos and opening 2™ with a strong hand!’ natural 2NT, so he obediently bid 3™. He He came back to hand with the nine of

said Julie. wanted to bid 3NT but he knew that, if he spades and led the jack of clubs intending

‘I am sorry but I was playing ordinary did, the Tournament Director would be to run it if West so much as twitched and,

Acol last night with Bill and just forgot to down on him like a ton of bricks for acting if he didn’t, he decided that he would rise

change my mindset back. And anyway we on unauthorised information. with the club king and finesse against East

got a top because everyone else went off in Julie alerted John’s 3™ and West could instead. West was more than obliging and

4™ when all three finesses failed,’ replied not help stirring by asking what the 3™ covered with the queen of clubs and so

‘You being lucky may be our best ‘It should show maximum points for his ‘Director!’ was the call from West as

chance, but I would prefer that you minor two-suiter and a heart void. How- soon as the hand ended. The Director

remembered the system,’ said Julie more ever, I think we all know what is really arrived and West continued: ‘John didn’t

in hope than expectation. going on,’ replied an exasperated Julie. have the hand he was supposed to have

knowing full well that John would have to that made, giving us a bottom.’

Game All. Dealer South. react as if she were making a slam try with The Director went through all that had

™ 64 John decided now to ask for aces and, even that all the explanations have been correct

t Q 10 7 5 though Julie showed none, he felt that the and the both John and Julie have bent over

´ Q 10 ´ 763 though he had no idea what the correct unauthorised information. The fact that

´ AK94 by John with his heart king. John now ‘Partner, you are obviously on a lucky

™ K5 surveyed the dummy and realised that he streak. However, I just can’t cope with all

t AK4 needed a miracle to make his contract. this forgetting of the system. We shall have

spades to be singleton or doubleton, he you want to carry on playing with me,’

cashed the ´A-K and heaved a sigh of suggested Julie.

Julie John and, when they broke 3-3, he realised that faced as his imagination ran riot. r

All Pass When you see this in an advertisement in the magazine, it means:

When John opened 2NT Julie waved the • They may choose to give master points in accordance with EBU scales.

Alert card and John couldn’t help gasp as • These master points will be accepted and added to player records.

he realised that he had persuaded Julie to • The bridge will be played in line with EBU regulations and bye laws, thus affording

play 2NT to show a weakish minor two- all players the protection of playing within the jurisdiction of the EBU.

suiter, so immediately everyone at the

table knew that he had got things wrong.

Julie’s 3t was just an attempt to play NOTE: Any events licensed by another National Bridge Organisation will not be

there but John, being used to being able to have master points credited to members’ records save for Wales, Scotland

involved in this sort of situation, knew and Northern Ireland with whom the EBU have a reciprocal agreement.

that he had to carry on in his own little