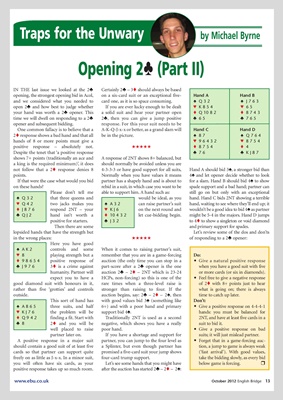 opening, the strongest opening bid in Acol, on a six-card suit or an exceptional five- Hand A Hand B

opener and subsequent bidding. response. For this your suit needs to be

One common fallacy is to believe that a A-K-Q-J-x-x or better, as a grand slam will Hand C Hand D

shows 7+ points (traditionally an ace and A response of 2NT shows 8+ balanced, but

a king is the required minimum)’, it does should normally be avoided unless you are

not follow that a 2t response denies 8 4-3-3-3 or have good support for all suits, Hand A should bid 3´, a stronger bid than

points. Normally when you have values it means 4´ and let opener decide whether to look

If that were the case what would you bid partner has a shapely hand and is about to for a slam. Hand B should bid 4´ to show

on these hands? rebid in a suit, in which case you want to be spade support and a bad hand; partner can

Please don’t tell me able to support him. A hand such as: still go on but only with an exceptional

´ Q32 that three queens and would be ideal, as you hand. Hand C bids 2NT showing a terrible

™ Q42 two jacks makes you ´ A32 can raise partner’s suit hand, waiting to see where they’ll end up; it

positive for starters. ® J32 to 4t to show a singleton or void diamond

Then there are some and primary support for spades.

in the wrong places: HHHHH of responding to a 2® opener:

Here you have good

´ AK2 controls and some When it comes to raising partner’s suit,

™ 8 playing strength but a remember that you are in a game-forcing Do:

expect you to have a HCPs, non-forcing) so this is one of the • Feel free to give a negative response

good diamond suit with honours in it, rare times when a three-level raise is of 2t with 8+ points just to hear

rather than five ‘grotties’ and controls stronger than raising to four. If the what is going on; there is always

This sort of hand has with good values bid 3´ (something like Don’t:

™ KJ76 the problem will be support bid 4´. hands: you must be balanced for

t Q942 finding a fit. Start with Traditionally 2NT is used as a second 2NT, and have at least five cards in a

® 8 2t and you will be negative, which shows you have a really suit to bid it.

well placed to raise poor hand. • Give a positive response on bad

partner later on. If you have a shortage and support for suits; it will just mislead partner.

A positive response in a major suit partner, you can jump to the four level as • Forget that in a game-forcing auc-

should contain a good suit of at least five a Splinter, but even though partner has tion, a jump to game is always weak

cards so that partner can support quite promised a five-card suit your jump shows (‘fast arrival’). With good values,

freely on as little as J-x-x. In a minor suit, four-card trump support. take the bidding slowly, as every bid

you will often have six cards, as your Let’s see some hands that you might have below game is forcing. r

positive response takes up so much room. after the auction has started 2® – 2t – 2´: