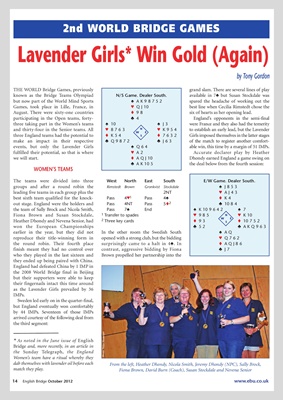 THE WORLD Bridge Games, previously grand slam. There are several lines of play

known as the Bridge Teams Olympiad N/S Game. Dealer South. available in 7´ but Susan Stockdale was

August. There were sixty-one countries t 98 six of hearts as her opening lead.

participating in the Open teams, forty- ® 4 England’s opponents in the semi-final

events, but only the Lavender Girls ´ Q64 able win, this time by a margin of 51 IMPs.

fulfilled their potential, so that is where ™ A2 Accurate declarer play by Heather

we will start. t A Q J 10 Dhondy earned England a game swing on

leading five teams in each group plus the 2NT ™ AJ43

earlier in the year, but they did not In the other room the Swedish South ´ AQ

reproduce their title-winning form in opened with a strong club, but the bidding ™ Q762

the round robin. Their fourth place surprisingly came to a halt in 4´. In t AQJ86

finish meant they had no control over contrast, aggressive bidding by Fiona ® J7

they ended up being paired with China.

England had defeated China by 1 IMP in

the 2008 World Bridge final in Beijing

but their supporters were able to keep

their fingernails intact this time around

as the Lavender Girls prevailed by 36

Sweden led early on in the quarter-final,

by 44 IMPs. Seventeen of those IMPs

arrived courtesy of the following deal from

* As noted in the June issue of English

Bridge and, more recently, in an article in

the Sunday Telegraph, the England

Women’s team have a ritual whereby they

dab themselves with lavender oil before each From the left, Heather Dhondy, Nicola Smith, Jeremy Dhondy (NPC), Sally Brock,