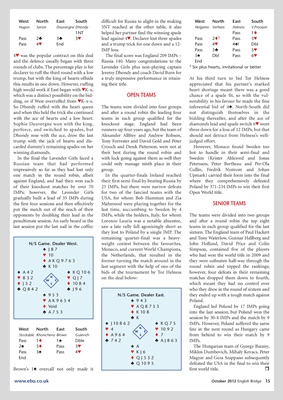 and the defence usually began with three Russia 140. Many congratulations to the End

rounds of clubs. The percentage play is for Lavender Girls plus non-playing captain 1 Six plus hearts, invitational or better

trump, but with the king of hearts offside a truly impressive performance in retain- At his third turn to bid Tor Helness

this results in one down. However, ruffing ing their title. appreciated that his partner’s marked

high would work if East began with ™K-x, heart shortage meant there was a good

which was a distinct possibility on the bid- OPEN TEAMS chance of a spade fit, so with the vul-

ding, or if West overruffed from ™K-x-x. nerability in his favour he made the fine

So Dhondy ruffed with the heart queen The teams were divided into four groups inferential bid of 4´. North-South did

with the ace of hearts and a low heart. teams in each group qualified for the bidding thereafter, and after the ace of

perforce, and switched to spades, but runners-up four years ago, but the team of three down for a loss of 12 IMPs, but that

Dhondy rose with the ace, drew the last Alexander Allfrey and Andrew Robson, should not detract from Helness’s well-

trump with the jack of hearts and dis- Tony Forrester and David Gold and Peter judged effort.

carded dummy’s remaining spades on her Crouch and Derek Patterson, were not at However, Monaco found Sweden too

winning diamonds. their best during the round robin and hot to handle in their semi-final and

Russian team that had performed could only manage ninth place in their Petersson, Peter Bertheau and Per-Ola

impressively so far as they had lost only group. Cullin, Fredrik Nystrom and Johan

one match in the round robin, albeit In the quarter-finals Ireland reached Upmark) carried their form into the final

against England, and had then won each their first semi-final by beating Russia by where they comprehensively defeated

of their knockout matches by over 70 23 IMPs, but there were narrow defeats Poland by 371-234 IMPs to win their first

IMPs; however, the Lavender Girls for two of the fancied teams with the Open World title.

gradually built a lead of 35 IMPs during USA, for whom Bob Hamman and Zia

put the match out of the reach of their last time, succumbing to Sweden by 4

opponents by doubling their lead in the IMPs, while the holders, Italy, for whom The teams were divided into two groups

penultimate session. An early board in the Lorenzo Lauria was a notable absentee, and after a round robin the top eight

last session put the last nail in the coffin: saw a late rally fall agonisingly short as teams in each group qualified for the last

they lost to Poland by a single IMP. The sixteen. The England team of Paul Hackett

remaining quarter-final was a heavy- and Tony Waterlow, Gunnar Hallberg and

™ 10 the Netherlands, that resulted in the who had won the world title in 2009 and

® K 10 last segment with the help of one of the round robin and topped the rankings;

´ A42 ´ K Q 10 6 bids of the tournament by Tor Helness however, four defeats in their remaining

™ QJ7 on the deal below: matches dropped them down to fourth,

´ 953 N/S Game. Dealer East. they ended up with a tough match against

Brown’s 1´ overcall not only made it first world title. r