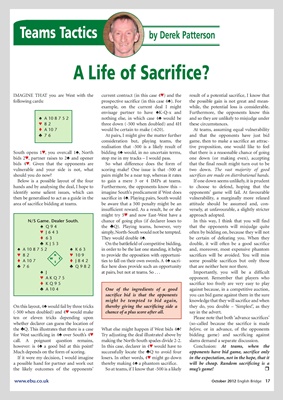 A Life of Sacrifice?

IMAGINE THAT you are West with the current contract (in this case 4™) and the result of a potential sacrifice, I know that

following cards: prospective sacrifice (in this case 4´). For the possible gain is not great and mean-

example, on the current deal I might while, the potential loss is considerable.

envisage partner to have ´K-Q-x and Furthermore, the opponents know this

® 76 At pairs, I might give the matter further and that the opponents have just bid

consideration but, playing teams, the game, then to make a sacrifice an attrac-

realisation that -500 is a likely result of tive proposition, one would like to feel

South opens 1™, you overcall 1´, North bidding 4´ would, in no uncertain terms, that there is a reasonable chance of going

bids 2™, partner raises to 2´ and opener stop me in my tracks – I would pass. one down (or making even), accepting

bids 4™. Given that the opponents are So what difference does the form of that the final result might turn out to be

vulnerable and your side is not, what scoring make? One issue is that -500 at two down. The vast majority of good

should you do now? pairs might be a near top, whereas it rates sacrifices are made on distributional hands.

Below is a possible layout of the four to gain a mere 3 or 4 IMPs at teams. If one down seems unlikely, it is prudent

hands and by analysing the deal, I hope to Furthermore, the opponents know this – to choose to defend, hoping that the

identify some salient issues, which can imagine South’s predicament if West does opponents’ game will fail. At favourable

then be generalised to act as a guide in the sacrifice in 4´. Playing pairs, South would vulnerability, a marginally more relaxed

area of sacrifice bidding at teams. be aware that a 500 penalty might be an attitude should be assumed and, con-

insufficient reward. As a result, he or she versely, at unfavourable, a slightly stricter

might try 5™ and now East-West have a approach adopted.

N/S Game. Dealer South. chance of going plus (if declarer loses to In this way, I think that you will find

´ Q94 the ®Q). Playing teams, however, very that the opponents will misjudge quite

™ J643 simply, North-South would not be tempted. often by bidding on, because they will not

t 63 They would double 4´. be certain of defeating you. When they

® KJ53 On the battlefield of competitive bidding, double, it will often be a good sacrifice

™ 82 N ™ 10 9 to provide the opposition with opportuni- sacrifices will be avoided. You will miss

® 76 ® Q982 fice here does provide such an opportunity that are neither here nor there.

™ AKQ75 opponent. Remember that players who

t KQ95 sacrifice too freely are very easy to play

® A 10 4 One of the ingredients of a good against because, in a competitive auction,

might be tempted to bid again, knowledge that they will sacrifice and when

On this layout, 4´ would fail by three tricks thereby giving the sacrificing side a they do, you double – ‘Simples!’, as they

(-500 when doubled) and 4™ would make chance of a plus score after all. say in the advert.

the ®Q. This illustrates that there is a case What else might happen if West bids 4´? before, or in advance, of the opponents

however: is 4´ a good bid at this point? In this case, declarer in 4™ would have to Conclusion: At teams, when the

Much depends on the form of scoring. successfully locate the ®Q to avoid four opponents have bid game, sacrifice only

If it were my decision, I would imagine losers. In other words, 4™ might go down in the expectation, not in the hope, that it

a possible hand for partner and work out thereby making 4´ a phantom sacrifice. will be cheap. Random sacrificing is a

the likely outcomes of the opponents’ So at teams, if I know that -500 is a likely mug’s game! r