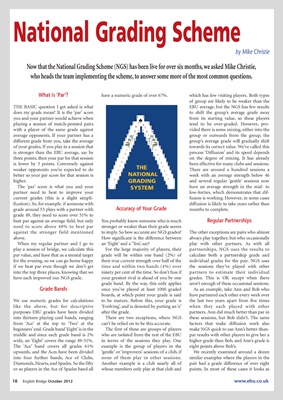 Now that the National Grading Scheme (NGS) has been live for over six months, we asked Mike Christie,

who heads the team implementing the scheme, to answer some more of the most common questions.

What is ‘Par’? have a numeric grade of over 67%. which has few visiting players. Both types

of group are likely to be weaker than the

THE BASIC question I get asked is what EBU average, but the NGS has few results

does my grade mean? It is the ‘par’ score to shift the group’s average grade away

you and your partner would achieve when from its starting value, so these players

playing a session of match-pointed pairs tend to be over-graded. However, pro-

with a player of the same grade against vided there is some mixing, either into the

average opponents. If your partner has a group or outwards from the group, the

different grade from you, take the average group’s average grade will gradually shift

of your grades. If you play in a session that towards its correct value. We’ve called this

is stronger than the EBU average, say by process ‘Diffusion’ and its speed depends

three points, then your par for that session on the degree of mixing. It has already

is lower by 3 points. Conversely against been effective for many clubs and sessions.

partner need to beat to improve your low-forties, which demonstrates that dif-

current grades (this is a slight simpli- fusion is working. However, in some cases

fication). So, for example. if someone with diffusion is likely to take years rather than

grade around 53 plays with a partner with Accuracy of Your Grade months to complete.

beat par against an average field, but only You probably know someone who is much Regular Partnerships

against the stronger field mentioned to imply. So how accurate are NGS grades? The other exceptions are pairs who almost

above. How significant is the difference between always play together, but who occasionally

When my regular partner and I go to an ‘Eight’ and a ‘Ten’, say? play with other partners. As with all

play a session of bridge, we calculate this For the large majority of players, their partnerships, NGS uses the results to

par value, and have that as a mental target grade will be within one band (2%) of calculate both a partnership grade and

for the evening, so we can go home happy their true current strength over half of the individual grades for the pair. NGS uses

into the top three places, knowing that we ninety per cent of the time. So don’t fuss if partners to estimate their individual

have each improved our NGS grade. your greatest rival is ahead of you by one grades. This is OK except when there

grade band. By the way, this only applies aren’t enough of these occasional sessions.

Grade Bands once you’ve played at least 1000 graded As an example, take Ann and Bob who

boards, at which point your grade is said have partnered each other every week over

We use numeric grades for calculations to be mature. Before this, your grade is the last two years apart from five times

like the above, but for descriptive ‘Evolving’, and is denoted by putting an ‘e’ when they each played with other

purposes EBU grades have been divided after the grade. partners. Ann did much better than par in

into thirteen playing card bands, ranging There are two exceptions, where NGS these sessions, but Bob didn’t. The same

from ‘Ace’ at the top to ‘Two’ at the can’t be relied on to be this accurate. factors that make diffusion work also

beginners’ end. Grade band ‘Eight’ is in the The first of these are groups of players make NGS quick to use Ann’s better-than-

wide, an ‘Eight’ covers the range 49-51%. in terms of the sessions they play. One higher grade than Bob, and Ann’s grade is

The ‘Ace’ band covers all grades 61% example is the group of players in the eight points above Bob’s.

upwards, and the Aces have been divided ‘gentle’ or ‘improvers’ sessions of a club, if We recently examined around a dozen

into four further bands, Ace of Clubs, none of them play in other sessions. similar examples where the players in the

Diamonds, Hearts, and Spades. So the fifty Another example is a club nearly all of pair had a grade difference of over eight

or so players in the Ace of Spades band all whose members only play at that club and points. In most of these cases it looks as