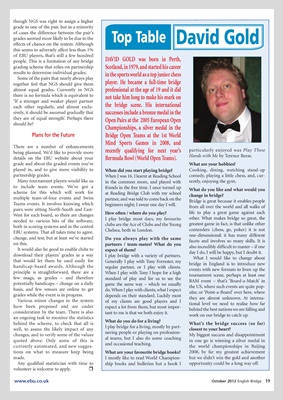 though NGS was right to assign a higher

grade to one of the pair, but in a minority

of cases the difference between the pair’s

grades seemed more likely to be due to the

effects of chance on the system. Although

this seems to adversely affect less than 1%

people. This is a limitation of any bridge DAVID GOLD was born in Perth,

grading scheme that relies on partnership Scotland, in 1979, and started his career

Some of the pairs that nearly always play

in the sports world as a top junior chess

together feel that NGS should give them player. He became a full-time bridge

almost equal grades. Currently in NGS professional at the age of 19 and it did

there is no formula which is equivalent to

‘If a stronger and weaker player partner

not take him long to make his mark on

each other regularly, and almost exclu- the bridge scene. His international

sively, it should be assumed gradually that successes include a bronze medal in the

they are of equal strength’. Perhaps there

Open Pairs at the 2005 European Open

Championships, a silver medal in the

Plans for the Future Bridge Open Teams at the 1st World

There are a number of enhancements

being planned. We’d like to provide more recently qualifying for next year’s particularly enjoyed was Play These

Hands with Me by Terence Reese.

details on the EBU website about your Bermuda Bowl (World Open Teams).

grade and about the graded events you’ve What are your hobbies?

played in, and to give more visibility to When did you start playing bridge? Cooking, dining, watching stand-up

partnership grades. When I was 16. I learnt at Reading School comedy, playing a little chess, and, cur-

Many tournament players would like us in the common room, and played with rently, enjoying the gym.

to include team events. We’ve got a friends in the free time. I once turned up What do you like and what would you

scheme for this which will work for at Reading Bridge Club with my school change in bridge?

multiple team-of-four events and Swiss partner, and was told to come back on the Bridge is great because it enables people

Teams events. It involves knowing which beginners night; I swear one day I will. from all over the world and all walks of

pairs were sitting North-South and East-

How often / where do you play? life to play a great game against each

West for each board, so there are changes

I play bridge most days, my favourite other. What makes bridge so great, the

needed to various bits of the software,

clubs are the Ace of Clubs and the Young greatest game in fact, is that unlike other

both in scoring systems and in the central

Chelsea, both in London. contenders (chess, go, poker) it is not

EBU systems. That all takes time to agree,

one-dimensional: it has many different

change, and test, but at least we’ve started Do you always play with the same

facets and involves so many skills. It is

on this. partners / team-mates? What do you

also incredibly difficult to master – if one

It would also be good to enable clubs to expect of them?

download their players’ grades in a way I play bridge with a variety of partners.

that would let them be used easily for Generally I play with Tony Forrester, my

bridge in England is to introduce new

handicap-based awards. Although the regular partner, or I play with clients.

events with new formats to liven up the

principle is straightforward, there are a When I play with Tony I hope for a high

tournament scene, perhaps at least one

few snags, as grades – and therefore standard of play and for us to see the

the US, where such events are quite pop-

basis, and few venues are online to get do. When I play with clients, what I expect

ular, or ‘Point-a-Board’ over here, where

grades while the event is in progress. depends on their standard. Luckily most

they are almost unknown. At interna-

tional level we need to realise how far

have been proposed and are under expect a lot from them, but most impor-

behind the best nations we are falling and

consideration by the team. There is also tant to me is that we both enjoy it.

work on our bridge to catch up.

an ongoing task to monitor the statistics

behind the scheme, to check that all is What do you do for a living?

What’s the bridge success (so far)

well, to assess the likely impact of any I play bridge for a living, mostly by part-

closest to your heart?

changes, and to verify some of the values nering people or playing on profession-

My biggest success and disappointment

quoted above. Only some of this is al teams, but I also do some coaching

in one go is winning a silver medal in

the world championships in Beijing

tions on what to measure keep being What are your favourite bridge books? 2008, by far my greatest achievement

made. I mostly like to read World Champion- but we didn’t win the gold and another

Any qualified statistician with time to ship books and bulletins but a book I opportunity could be a long way off.

volunteer is welcome to apply. r