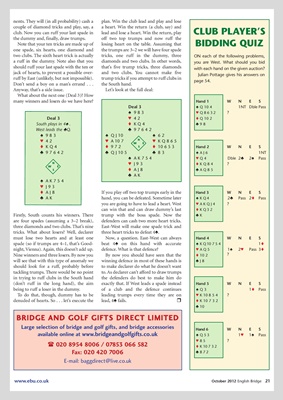 nents. They will (in all probability) cash a plan. Win the club lead and play and lose

couple of diamond tricks and play, say, a a heart. Win the return (a club, say) and

club. Now you can ruff your last spade in lead and lose a heart. Win the return, play CLUB PLAYER’S

the dummy and, finally, draw trumps. off two top trumps and now ruff the

Note that your ten tricks are made up of losing heart on the table. Assuming that BIDDING QUIZ

one spade, six hearts, one diamond and the trumps are 3–2 we will have four spade

two clubs. The sixth heart trick is actually tricks, one ruff in the dummy, three ON each of the following problems,

a ruff in the dummy. Note also that you diamonds and two clubs. In other words, you are West. What should you bid

should ruff your last spade with the ten or that’s five trump tricks, three diamonds with each hand on the given auction?

jack of hearts, to prevent a possible over- and two clubs. You cannot make five Julian Pottage gives his answers on

ruff by East (unlikely, but not impossible). trump tricks if you attempt to ruff clubs in

Anyway, that’s a side issue. Let’s look at the full deal:

What about the next one (Deal 3)? How

many winners and losers do we have here? Hand 1 W N E S

you are going to have to lead a heart. West ™AKQJ4 ?

can win that and can draw dummy’s last t KQ32

Firstly, South counts his winners. There trump with the boss spade. Now the ®K

must lose two hearts and at least one Now, a question. East-West can always Hand 4 W N E S

Nine winners and three losers. By now you By now you should have seen that the t 10 2 ?

should look for a ruff, probably before to make declarer do what he doesn’t want

tackling trumps. There would be no point to. As declarer can’t afford to draw trumps

(don’t ruff in the long hand), the aim exactly that. If West leads a spade instead Hand 5 W N E S

being to ruff a loser in the dummy. of a club and the defence continues ´Q3 1t Pass