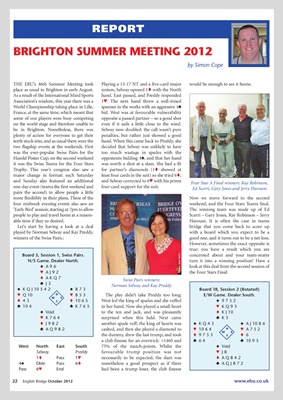 THE EBU’s 46th Summer Meeting took Playing a 15-17 NT and a five-card major would be enough to see it home.

place as usual in Brighton in early August. system, Selway opened 1t with the North

As a result of the International Mind Sports hand. East passed, and Preddy responded

Association’s wisdom, this year there was a 1™. The next hand threw a well-timed

World Championship taking place in Lille, spanner in the works with an aggressive 4´

France, at the same time, which meant that bid. West was at favourable vulnerability

on the world stage and therefore unable to even if it sails a little close to the wind.

be in Brighton. Nonetheless, there was Selway now doubled: the call wasn’t pure

plenty of action for everyone to get their penalties, but rather just showed a good

teeth stuck into, and as usual there were the hand. When this came back to Preddy, she

two flagship events at the weekends. First decided that Selway was unlikely to have

Harold Poster Cup; on the second weekend opponents bidding 4´, and that her hand

it was the Swiss Teams for the Four Stars was worth a shot at a slam. She had a fit

Trophy. This year’s congress also saw a for partner’s diamonds (1t showed at

major change in format: each Saturday least four cards in the suit) so she tried 6t,

and Sunday also featured an additional and Selway corrected to 6™ with his prime Four Star A Final winners: Ray Robinson,

pairs the second) to allow people a little

more flexibility in their plans. Three of the Now we move forward to the second

‘Early Bird’ session, starting at 7pm to allow The winning team was made up of Ed

able time if they so desired. Harouni. It is often the case in teams

played by Norman Selway and Kay Preddy, with a board which you expect to be a

winners of the Swiss Pairs.: good one, and it turns out to be a net loss.

However, sometimes the exact opposite is

true: you have a result which you are

Board 5, Session 1, Swiss Pairs. concerned about and your team-mates

N/S Game. Dealer North. turn it into a winning position! Have a

´ A96 look at this deal from the second session of

West North East South 75% of the match-points. Whilst the ´ Void

Pass 6™ End had been a trump loser, the club finesse