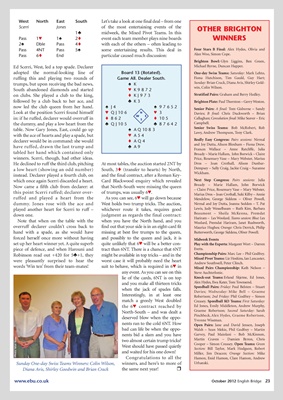 Scerri Jones of the most entertaining events of the

1® midweek, the Mixed Pivot Teams. In this

on clubs. She played a club to the king, t KJ973 Stratified Pairs: Graham and Berry Hedley.

followed by a club back to her ace, and ® K3 Brighton Plate: Paul Thornton – Gerry Weston.

with the ace of hearts and play a spade, but ™ A54

declarer would be in command: she would t AQ4 Really Easy Congress: Pairs sessions: Nirmal

have ruffed, drawn the last trump and ® A9

He declined to ruff the third club, pitching At most tables, the auction started 2NT by Dros – Joan Crothall, Alison Dunbar-

instead. Declarer played a fourth club, on and the final contract, after a Roman Key-

Now came a fifth club from declarer: at that North-South were missing the queen

ruffed and played a heart from the As you can see, 6™ will go down because Mendelow, George Siddens – Oliver Powell,

down one. judgment as regards the final contract:

Note that when on the table with the when you have the North hand, and you Woolard, Premdat Hariram, Janet Rushworth,

overruff declarer couldn’t cross back to find out that your side is in an eight-card fit Maurice Hughes; Orange: Chris Derrick, Philip

hand with a spade, as she would have missing at best five trumps to the queen, Butterworth, George Siddens, Oliver Powell.

forced herself once more without having and possibly to the queen and jack, it is Midweek Events

set up her heart winner yet. A quite superb quite unlikely that 6™ will be a better con- Play with the Experts: Margaret Wort – Darren

piece of defence, and when Harouni and tract than 6NT. There is a chance that 6NT Evetts.

Robinson read out +420 for 5®+1, they might be available in top tricks – and in the Championship Pairs: Marc Lee – Phil Godfrey.

were pleasantly surprised to hear the worst case it will probably need the heart Andrew Southwell, Peter Clinch.

words ‘Win ten’ from their team-mates! suit to behave, which is required in 6™ in Mixed Pairs Championship: Kath Nelson –

any event. As you can see on this Steve Auchterlonie.

North-South – and was dealt a Graeme Robertson; Second Saturday: Sarah

bad can life be when the oppo- Walsh – Sean Mekie, Phil Godfrey – Martin

nents bid a slam and you have Garvey, Paul Maiolani – Bob McKinnon,

and waited for his one down! Miller, Jim Deacon; Orange Section: Mike

Congratulations to all the Hamon, Enid Hamon, Clare Hamon, Andrew