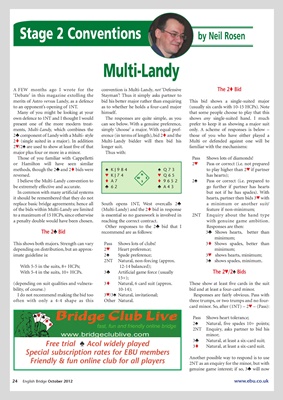 A FEW months ago I wrote for the convention is Multi-Landy, not ‘Defensive The 2t Bid

‘Debate’ in this magazine extolling the Stayman’! Thus it simply asks partner to

merits of Astro versus Landy, as a defence bid his better major rather than enquiring This bid shows a single-suited major

to an opponent’s opening of 1NT. as to whether he holds a four-card major (usually six cards with 10-15 HCPs). Note

Many of you might be looking at your himself. that some people choose to play that this

own defence to 1NT and I thought I would The responses are quite simple, as you shows any single-suited hand. I much

present one of the more modern treat- can see below. With a genuine preference, prefer to keep it as showing a major suit

ments, Multi-Landy, which combines the simply ‘choose’ a major. With equal pref- only. A scheme of responses is below –

2® component of Landy with a Multi- style erence (in terms of length), bid 2t and the those of you who have either played a

2t (single suited in a major). In addition Multi-Landy bidder will then bid his Multi or defended against one will be

2™/2´ are used to show at least five of that longer suit. familiar with the mechanisms:

major plus four or more in a minor. Thus with:

Those of you familiar with Cappelletti Pass Shows lots of diamonds!

or Hamilton will have seen similar 2™ Pass or correct (i.e. not prepared

be extremely effective and accurate. ® 62 ® A43 go further if partner has hearts

In common with many artificial systems but not if he has spades). With

it should be remembered that they do not hearts, partner then bids 3™ with

of the bids within Multi-Landy are limited (Multi-Landy) and the 2t bid in response feature if non-minimum;

to a maximum of 15 HCPs, since otherwise is essential so no guesswork is involved in 2NT Enquiry about the hand type

a penalty double would have been chosen. reaching the correct contract. with genuine game ambition.

Other responses to the 2® bid that I Responses are then:

The 2® Bid recommend are as follows: 3® Shows hearts, better than

depending on distribution, but an approx- 2™ Heart preference; minimum;

(depending on suit qualities and vulnera- 3t Natural, 6 card suit (approx. These show at least five cards in the suit

I do not recommend making the bid too 3™/3´ Natural, invitational; Responses are fairly obvious. Pass with

often with only a 4-4 shape as this Other Natural. three trumps, or two trumps and no four-

3® Natural, at least a six-card suit;

Another possible way to respond is to use

Friendly & fun online club for all players 2NT as an enquiry for the minor, but with

genuine game interest; if so, 3® will now