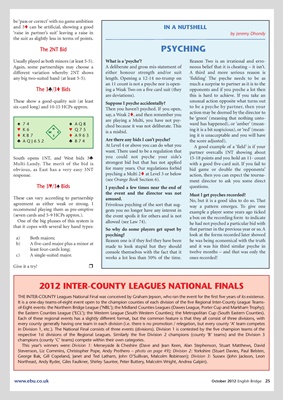 be ‘pass or correct’ with no game ambition

and 3t can be artificial, showing a good IN A NUTSHELL

the suit as slightly less in terms of points.

Usually played as both minors (at least 5-5). What is a ‘psyche’? Reason Two is an irrational and erro-

Again, some partnerships may choose a A deliberate and gross mis-statement of neous belief that it is cheating – it isn’t.

are deviations). this is hard to achieve. If you take an

These show a good-quality suit (at least Suppose I psyche accidentally? unusual action opposite what turns out

six-card long) and 10-15 HCPs approx. Then you haven’t psyched. If you open, to be a psyche by partner, then your

say, a Weak 2t, and then remember you action may be deemed by the director to

are playing a Multi, you have not psy- be ‘green’ (meaning that nothing unto-

ched because it was not deliberate. This

want. There used to be a regulation that partner overcalls 1NT showing about

Multi-Landy. The merit of the bid is strongest bid but that has not applied with a good five-card suit. If you fail to

obvious, as East has a very easy 3NT for many years. Our regulations forbid bid game or double the opponents’

response. psyching a Multi 2t at Level 3 or below action, then you can expect the tourna-

The 3™/3´ Bids I psyched a few times near the end of questions.

the event and the director was not Must I get psyches recorded?

These can vary according to partnership amused. No, but it is a good idea to do so. That

agreement as either weak or strong. I Frivolous psyching of the sort that sug- way a pattern emerges. To give one

(seven cards and 5-9 HCPs approx.). the event spoils it for others and is not a box on the recording form to indicate

One of the big plusses of this system is allowed (see Law 74). he had not psyched a particular bid with

that it copes with several key hand types:

So why do some players get upset by that partner in the previous year or so. A

b) A five-card major plus a minor at

works a lot less than 50% of the time. ones recorded!

THE INTER-COUNTY Leagues National Final was conceived by Graham Jepson, who ran the event for the first five years of its existence.

Each of these regional events has a slightly different format, but the common feature is that they all consist of three divisions, with

every county generally having one team in each division (i.e. there is no promotion / relegation, but every county ‘A’ team competes

in Division 1, etc.). The National Final consists of three events (divisions). Division 1 is contested by the five champion teams of the

respective 1st divisions of the Regional Leagues. Similarly the five Division 2 champions (county ‘B’ teams) and the Division 3

champions (county ‘C’ teams) compete within their own categories.