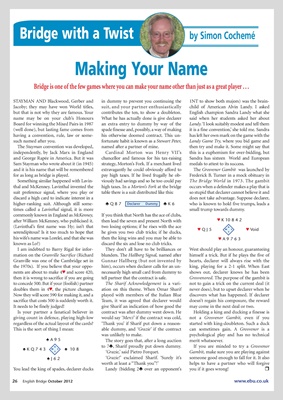 Bridge is one of the few games where you can make your name other than just as a great player . . .

STAYMAN AND Blackwood, Gerber and in dummy to prevent you continuing the 1NT to show both majors) was the brain-

Jacoby; they may have won World titles, suit, and your partner enthusiastically child of American Alvin Landy. I asked

but that is not why they are famous. Your contributes the ten, to show a doubleton. English champion Sandra Landy what she

Board for winning the Mixed Pairs in 1987 an extra entry to dummy by way of the Landy. ‘I look suitably modest and tell them

(well done), but lasting fame comes from spade finesse and, possibly, a way of making it is a fine convention,’ she told me. Sandra

having a convention, rule, law or some- his otherwise doomed contract. This un- has left her own mark on the game with the

such named after you. fortunate habit is known as a Stewart Peter, Landy Game Try, where you bid game and

The Stayman convention was developed, named after a partner of mine. then try and make it. Some might say that

independently, by Jack Marx in England Cardinal Morton was Henry VII’s this is a euphemism for over-bidding, but

and George Rapée in America. But it was chancellor and famous for his tax-raising Sandra has sixteen World and European

Sam Stayman who wrote about it (in 1945) strategy, Morton’s Fork. If a merchant lived medals to attest to its success.

for as long as bridge is played. pay high taxes. If he lived frugally he ob- Frederick B. Turner in a mock obituary in

Something similar happened with Lavin- viously had savings and so he too could pay The Bridge World in 1973. The gambit

thal and McKenney. Lavinthal invented the high taxes. In a Morton’s Fork at the bridge occurs when a defender makes a play that is

suit preference signal, where you play or table there is a suit distributed like this: so stupid that declarer cannot believe it and

discard a high card to indicate interest in a does not take advantage. Suppose declarer,

higher-ranking suit. Although still some- ®Q87 Declarer Dummy ®K6 who is known to hold five trumps, leads a

times called a Lavinthal signal, it is more small trump towards dummy.

commonly known in England as McKenney, If you think that North has the ace of clubs,

after William McKenney, who publicised it. then lead the seven and present North with ™ K 10 8 4 2

(Lavinthal’s first name was Hy; isn’t that two losing options; if he rises with the ace N

serendipitous? Is it too much to hope that he gives you two club tricks; if he ducks, S

his wife’s name was Lorelei, and that she was then the king wins and you may be able to ™A9763

known as Lo?) discard the six and lose no club tricks.

I am indebted to Barry Rigal for infor- They don’t all have to be brilliances or West should play an honour, guaranteeing

mation on the Granville Sacrifice (Richard blunders. The Hallberg Signal, named after himself a trick. But if he plays the five of

Granville was one of the Cambridge set in Gunnar Hallberg (but not invented by hearts, declarer will always rise with the

the 1970s). If you believe that your oppo- him), occurs when declarer calls for an un- king, playing for a 2-1 split. When East

nents are about to make 4™ and score 420, necessarily high small card from dummy to shows out, declarer knows he has been

then it is wrong to sacrifice if you are going tell partner that the contract is safe. Grosvenored. The purpose of the gambit is

to concede 500. But if your (foolish) partner The Sharif Acknowledgement is a vari- not to gain a trick on the current deal (it

doubles them in 4™, the picture changes. ation on this theme. When Omar Sharif never does), but to upset declarer when he

Now they will score 590 for making it, and a played with members of the Italian Blue discovers what has happened. If declarer

sacrifice that costs 500 is suddenly worth it. Team, it was agreed that declarer would doesn’t regain his composure, the reward

It needs to be finely judged! give Sharif an indication of how good the may come in the next deal or two.

Is your partner a fanatical believer in contract was after dummy went down. He Holding a king and ducking a finesse is

giving count in defence, playing high-low would say ‘Merci’ if the contract was cold, not a Grosvenor Gambit, even if you

regardless of the actual layout of the cards? ‘Thank you’ if Sharif put down a reason- started with king-doubleton. Such a duck

This is the sort of thing I mean: able dummy, and ‘Grazie’ if the contract can sometimes gain. A Grosvenor is a

was unlikely to make. psychological play and has no technical

´A95 The story goes that, after a long auction merit whatsoever.

N to 7®, Sharif proudly put down dummy. If you are minded to try a Grosvenor

‘Grazie,’ said Pietro Forquet. Gambit, make sure you are playing against

´J62 ‘Grazie!’ exclaimed Sharif. ‘Surely it’s someone good enough to fall for it. It also

worth at least a “Thank you”!’ helps to have a partner who will forgive

You lead the king of spades, declarer ducks Landy (bidding 2® over an opponent’s you if it goes wrong! r